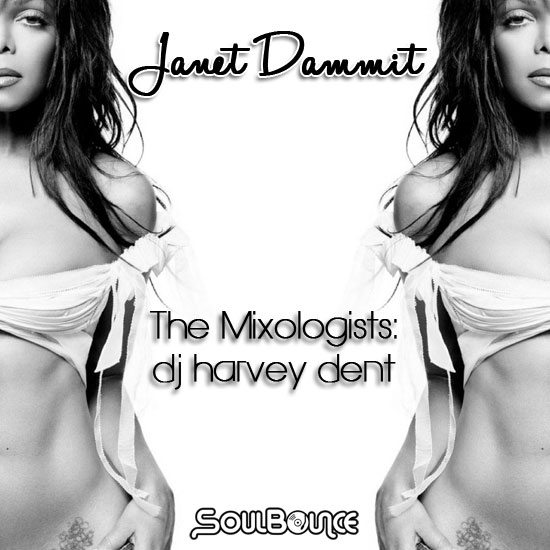 Did you think that was the end? Of course not. Just like you, we wish that #31DaysOfJanet wouldn't end. But we couldn't think of a more perfect day — the start of her Unbreakable World Tour — to finish off our month-long tribute to Janet Jackson. And we couldn't think of a better way than by letting our boy dj harvey dent loose to make a mix of some of Janet's finest for your listening pleasure, which we're simply dubbing Janet Dammit.

The mixologist extraordinaire went to work on this mix featuring many of the hits that appeared on our Top 30 Janet Jackson Singles list, plus he adds in some of Janet's other classics, like "Feedback," "R&B Junkie," "Don't Stand Another Chance" and "All Nite (Don't Stop)." On top of that, he includes some of the best remixes and reworks and some of her more memorable guest appearances.

dj harvey dent ties it all up in a bow in a way that only he can, with an expert mix that seamlessly blends it all together. Just think of it as our way of saying, "Dammit, Janet, we love you."

Escapade
What Have You Done For Me Lately
Miss You Much
You Want This
All For You
All For You (DJ Quik Remix)
When I Think Of You
R&B Junkie
Feedback
Busta Rhymes feat. Janet Jackson - What's It Gonna Be?!
Control
Young Love
Don't Stand Another Chance
The Pleasure Principle
The Pleasure Principle (Garren Remix)
Would You Mind (E.Doza Remix)
Someone To Call My Lover (Jeftuz Remix)
Rock With U
Rock With U (FS Green Rework)
I Get Lonely
Again
Any Time, Any Place
Funny How Time Flies (When You're Having Fun)
Come Back To Me
Got 'Til It's Gone
Got 'Til It's Gone (Ummah Jay Dee's Revenge Mix)
Together Again (DJ Premier 100 In A 50 Remix)
That’s The Way Love Goes (Mackapella Mix)
Doesn't Really Matter
Go Deep
Go Deep (Timbaland Remix)
Beenie Man feat. Janet Jackson - Feel It Boy
Shaggy feat. Janet Jackson - Luv Me, Luv Me
Son Of A Gun (I Betcha Think This Song Is About You)
Love Will Never Do (Without You)
Nasty
Rhythm Nation
All Nite (Don't Stop)
So Excited feat. Khia
Herb Alpert feat. Janet Jackson - Diamonds
No Sleeep (DJ Beset Edit)
If (Kaytranada Remix)