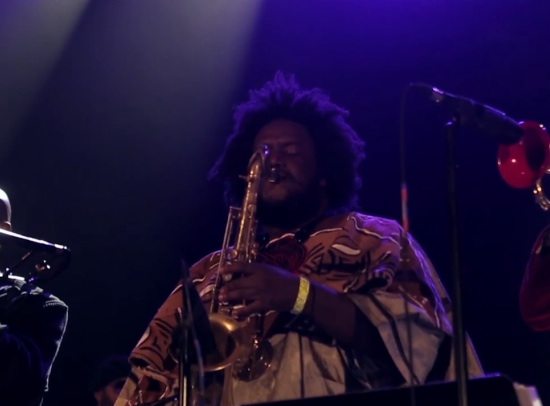 Can we just pause a moment to give it up for the West Coast? From hip hop to electronic soul, Cali-bred artists have dominated our playlists this year and held us captive with innovative compositions and riveting allegories (not to mention a certain film that has ruled the box office two weekends in a row). Kendrick Lamar, Flying Lotus, James Fauntleroy, The Internet, Miguel Atwood-Ferguson, Thundercat, India Shawn, Tori Kelly, Miguel, TOKiMONSTA...we could go on and on. But one musician stands out from this stellar crowd as a bastion of modern jazz. That man is Kamasi Washington, a virtuosic saxophonist, composer, arranger and all-around music wiz.

For a number of years now, Washington has been one of the music industry's best kept secrets, opting to stay in the background as a musician touring with artists like Chaka Khan, Snoop Dogg and Stanley Clarke. But just a few months ago, his debut release The Epic thrust him out of the shadows and smack dab into the spotlight. The explorative work is a daring 3-disc project born out of a month-long marathon recording session with his band of equally talented peers: Ryan Porter (trombone), Dontae Winslow (trumpet), Cameron Graves (piano), Brandon Coleman (keyborads), Miles Mosley (upright bass), Stephen Bruner (electric bass), Tony Austin (drums), Ronald Bruner Jr. (drums) and Leon Mobely (percussion). The album, which also features a 20-person choir and a 32-piece orchestra, has received critical praise within the jazz community and is being embraced by music lovers all over the world.

As Kamasi tours in support of the album (with a select 7-piece ensemble), he recently unveiled a visual accompaniment piece that centers on Epic track "The Rhythm Changes." Shot by renowned hip hop photographer/filmmaker Brian Cross (aka B+), the film captures the creative cohesion of the studio sessions along with the electric atmosphere from the album release performance at L.A.'s Regent Theater. Melodically accentuated by Patrice Quinn's breezy vocals, the tune and video capture just a hint of the greatness that is featured throughout the album.

After you view the amazing performance, scroll down for the remaining tour dates to see if Kamasi and crew will be heading to a city near you. For those unable to attend a live show, be sure to catch Kamasi and bassist Miles Mosely via an AOL Build livestream at 5 p.m. today. The Epic is currently available for purchase on iTunes and Amazon.