Thundercat Goes Through ‘Them Changes’ On ‘Why? With Hannibal Buress’ 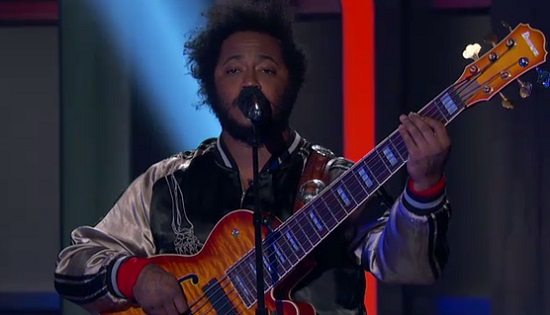 Thundercat is gearing up to hit the road this fall in a city near you, even including a few dates in the UK with R&B band The Internet. But before he hits the road, he took some time out of his busy schedule to stop by Comedy Central's newest bit of hilariousness, Why? With Hannibal Buress. During his visit to the set, he stepped on the stage to perform his latest single, "Them Changes," with his homeboy (and Why?'s resident DJ) Flying Lotus.

With FlyLo laying down the beat, pianist Dennis Hamm adding some backing and Thundercat of course hitting us in the face with his bass, the mournful yet exhilarating tune comes to life quite nicely. The simple set up allowed for the song to breath, with the performer delivering an almost studio quality take of the song.  We say almost because the lack of a backing vocalist didn't allow some the songs more intricate harmonies and ad-libs to occur. Still, it was a stellar set and a good introduction for those who are still sleeping on the musical wonder that is Thundercat.

If you like what you see in the clip (which you can play below), you can catch it live in a little over a week at NYC's edition of the AFROPUNK Festival and several other dates in the coming months.