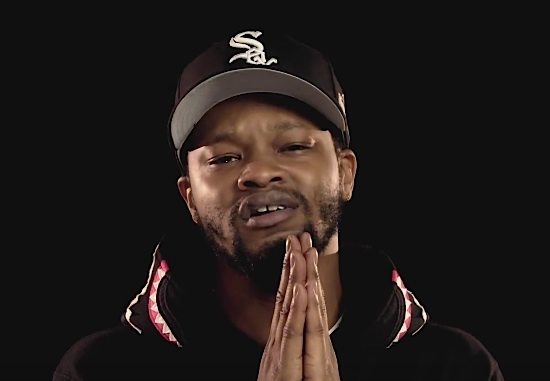 BJ the Chicago Kid is trying his hardest to stay saved, but his girlfriend isn’t making it easy for him. In his brand new video for the song “Church” he details how he’s trying to rest up for church service in the morning but bae is begging him to come over for what Solange once called a “champagne chronik nightcap.” As soon as the video begins BJ is shown in a praying position as he sings, “She say she wanna drink, do drugs and have sex tonight / But I got church in the morning.”

Now if you’re wondering which option he chose, he goes on to say, “Hopefully we can go to heaven, ‘cause I’m staying.” As the video goes on he expresses how hard it is to say no to someone who is so good looking and is blessed with so many curves. While singer Buddy adds an old soul vibe to the song with vocals that sound like a sample, Chance the Rapper joins in and spits a verse about his experience with a young lady who apparently wasn’t interested in being saved at all. “Pray that one of these days she’ll wanna behave,” he raps. Get into this soulful song and video that covers the battle between sinful and sanctified, and be on the lookout for more from BJ the Chicago Kid as the release of his debut album, In My Mind, nears.


TAGS:  bj the chicago kid, Buddy, Chance the Rapper, solange
Previous: Morning Soul: One For The Treble, Two For The Bass Next: Disclosure & Sam Smith Deliver An ‘Omen’ & Some ‘Bling’ To BBC Radio 1 ‘Live Lounge’