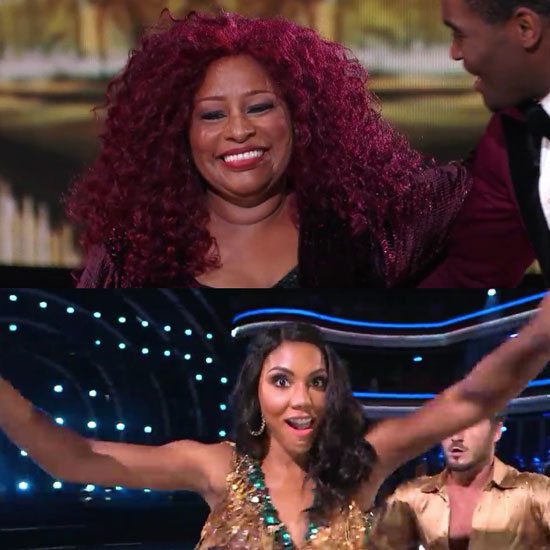 On last night's Dancing With the Stars we saw our favorite R&B divas Chaka Khan and Tamar Braxton go toe-to-toe again and unfortunately we had to see one of them go. This week, the two showed just how much they like to Cha Cha and Foxtrot with their partners for the show's Hometown Glory night, where contestants did dances to represent where they grew up.

Chaka and her partner-in-dance (and South African prince) Keo Motsepe performed the Foxtrot to "Chicago" by Frank Sinatra that left a lot to be desired. Decked out in matching maroon ballroom outfits, Chaka struggled to keep up with Keo, forgetting a few of her moves but still keeping a smile on her face. Keo made up for the missteps but not enough since they were the first couple to be eliminated this season. It was pretty sad to see the 62-year-old songstress go, but we're sure her positive attitude, smile and Keo's slick moves made Chi-town proud.

On the opposite end of the leaderboard, Tamar later wowed the audience with a vibrant performance of Sister Sledge's "We Are Family" dedicated, of course, to her sisters while her eldest, Toni Braxton, cheered her on from the audience. With a bevy of dancers playing assist to her sultry moves, Tamar was joined by dance partner Valentin Chmerkovskiy who swept her off her feet while she gave him a run for his money. The duo closed it out with bodyrolls, an extra helping of sass and fluid moves and received a standing ovation and stellar reviews from the judges.

If you can't get enough of Tamar, you can catch her all over your TV, either on The Real, Braxton Family Values or Tamar & Vince. Besides dance practice, Tamar is also gearing up for the release of her third studio album Calling All Lovers and she recently releasing her single "Angels & Demons." You can pre-order the new album, which drops on October 2nd, over on iTunes and keep your fingers and toes crossed that we see the songstress on DWTS every week because she' actually quite impressive. Until then, we hope that Chaka will pop back up on our screens for a DWTS reunion or perhaps another reality show. Watch Chaka and Tamar dance it out right here, and let us know if the DWTS judges were right for sending our girl Chaka home so soon before Gary Busey or Paula Deen.