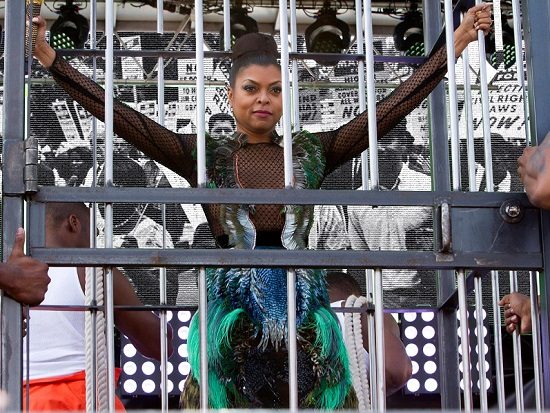 And we're back! Are your edges still intact? The season two premiere of Empire was, in a phrase, a lot. We visited Lucious in jail, attended a #FreeLucious/#BlackLivesMatter event in Central Park, were introduced to an aggressive lesbian music industry wheeler and dealer and got cameos from Swizz Beatz, Rev. Al Sharpton, Andre Leon Talley and Don Lemon — and that was just in the first 10 minutes! But you didn't expect Empire's second season to go small, did you? Lee Daniels and his team shoehorned almost a whole season's worth of plot into one hour, so sit back, relax and calm your nerves, as we've got a lot to unpack.

Episode 201: The Devils Are Here

When we last left the Lyon clan, Lucious was being led away in handcuffs as the unholy alliance of Cookie, Andre, Hakeem and Anika looked poised to usurp the Empire throne. Oh, and Jamal was in his feelings because he felt his daddy finally showed he loved him by choosing him as his successor (never mind the fact that up until that point his father actively tried to sabotage his career and dehumanize him for his sexuality).

This season begins at the aforementioned #FreeLucious concert. Why do they want him freed when he's actually guilty of the crime? That's exactly what Hakeem (and the audience) wants to know. But Cookie breaks it down for the immature youngster: The concert is all about attracting a certain high-dollar investor, Mimi Whiteman (played by a game Marisa Tomei), who can help finance their coup of the company Lucious built (and also seems to want to dip our girl Cookie all up in her milk). Amid all the behind-the-scenes drama going on, though, there's still a show that has to go on. A cage is lowered to the stage containing...a gorilla? Oh wait, that's Cookie in a gorilla suit trying to make a convoluted point about mass incarceration. We're sure an important point was trying to be made here, but the sheer ridiculousness of the moment overshadowed any message the show was trying to get across

While Cookie hobnobs with the previously mentioned stars and Miss Mimi, Lucious watches the events dressed in prison orange on a 50-inch plasma screen in one of the best decorated prisons we've ever seen. Of course he's seething about his predicament, but jail seems to be treating him (or at least his physique) rather well. The same can't be said for Cookie's cousin Jermel (DeRay Davis), who is locked up with Lucious and Frank Gathers (Chris Rock) — who just so happens to be the man Cookie snitched on to get out of jail early. If you remember last season, Cookie sent Jermel after one of Frank's boys after she mistook flowers from Lucious as a death threat from Frank. Looks like those chickens are coming home to roost.

Meanwhile, at Empire's offices, things seem to be back to normal. Well, almost. In his father's stead, Jamal is becoming more and more of an asshole, in other words just like Lucious. That might be because he's the only one paying his father constant visits in the clink and therefore has his father's snaky-ass words constantly in his ear. Jamal might be in charge, but it's Lucious that's still calling the shots, and he especially wants to know about the "lesbian bitch" in the red suit that he saw cozying up to Cookie at the concert. His snake sense is tingling, and it's telling him that something is amiss.

Speaking of Mimi, Cookie & Co. throw a raunchy party to entice the potential investor to put her capital toward their cause, with everyone in her vicinity with a uterus, including Cookie and Boo Boo Kitty, shamelessly flirting to get her business. But the minute Anika comes into the picture, Mimi is more interested in giving her the business. While she's reluctant to have her arch nemesis involved, once Cookie sees an opportunity to use Anika to her advantage, she sends her over to Mimi like a lamb to a lion. What follows is the most siditty twerk television has ever seen as Boo Boo Kitty works it like Whitley Gilbert trying to pay tuition. Across town, Jamal, who's reunited with his former Latin lover, is offered an opportunity to receive an award from the LGBT community. He's noticeably apprehensive about it, but goes along with it anyway. This leads to an over-the-top meeting with Miss Lawrence in his office to the tune of Sylvester's disco classic "Mighty Real" and some pretty delicious Donnie McClurkin shade. But Jamal, who is slowly becoming his father, has his own internalized homophobia to deal with and can't be bothered with receiving the honor.