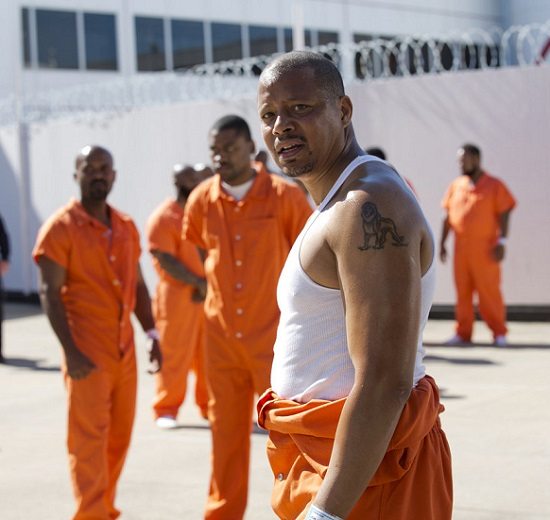 Back in lockup, Jermel is trying to get in touch with Cookie, to no avail. Frank seems to know what's up and he's not too happy, which is eating at Jermel (quite literally, it turns out). However, Cookie is too focused on her corporate takeover to really pay attention to the signs, like the ugly-ass flowers that her assistant Portia brings to her attention. But maybe Cookie should've been paying more attention all around, as Mimi double crosses her axis of Empire, making a deal with Lucious and Jamal directly behind their backs. It seems that even a night in Anika's kitty couldn't seal the deal ("You can't even dyke right," Cookie quips), and Jamal is all too happy to throw it in their faces. Even Lucious FaceTimes in from the posh confines of the most lenient prison ever to chime in with his "Game over, bitches."

Though the events in the office are worrisome, they're not even top of the list for Cookie, who comes home to her sister Carol (Tasha Smith) and a big box waiting for her at the door. When she opens the box, she finds her cousin Jermel's head. Before we can question how the hell Frank express mailed (and gift-wrapped!) Jermel's head from prison, Cookie is in protective mode. She makes all of her children hole up inside Lucious' house, the most safe place she can think of, while she goes to jail to make a deal with the devil himself. "Why you look like Mr. T?" a humbled Lucious asks, but the love/hate thing the two have going seems to exist even through prison walls. Cookie tells him about the problem with Frank and the threat it poses and asks Lucious to fix it.

And boy does he! He meets with the Don and sets him straight on harming his family. And when Frank orders his goons to take Lucious out, he learns that things aren't what they seem. Lucious has the upper hand with Frank's thugs, having bought their cooperation with favors on the outside. Lucious orders them to take Frank out and whatever they do to him sounds positively excruciating (or at least as excruciating as Chris Rock's limited acting abilities allow him to portray).

Once she gets the all clear, Cookie comes to the family mansion to let her boys know. After getting the news, Jamal decides to start smelling his fool self even more, kicking his brothers and mother out of the house. A visibly shook Cookie slaps the taste out of Lil' Lucious' mouth — twice — but he seems resolute in his decision. Until he closes the door, that is, as he's a weeping mess.

And with that, Empire packs more into its first hour than most shows will put into their entire seasons. And we didn't even touch on some of the other things going on, like Andre and Rhonda burying Vernon's body or what appears to be a burgeoning weed habit for Hakeem (and was that Petey Pablo?). It's all definitely entertaining, but we'd be lying if we said it wasn't a bit...well...too much. While the drama-packed shows are what drew us into the series, it almost feels as if the creators and writers might've blown their wad on this one. Time, and more episodes, will tell of course, and we'll be here all season giving you the rundown. In the meantime, feel free to comment and let us know if you're hopeful for or afraid of what's to come the rest of this season.