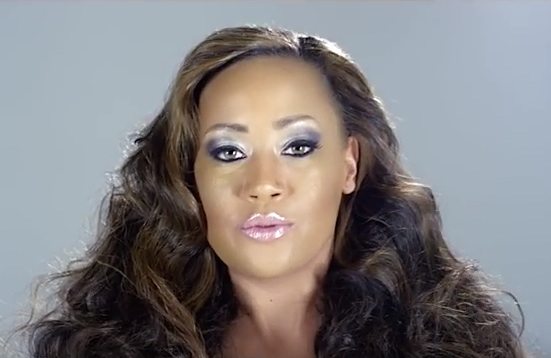 Farrah Franklin is really trying to do the damn thing. Or maybe she's just trying it. Destiny’s ex-communicated stepchild surprised us recently with the release of her single “Magic N Makeup.” While we found the self-reflective ballad to be a bit tepid, we have to give the woman props for putting herself out there. Now she’s released the video for the single, bringing the personal song to life. Unfortunately, the video is just as unremarkable.

The Dale Stelly-directed video finds Farrah reflecting on her life and D-list career, showing images from her time in Destiny’s Child, her photo spread in KING Magazine and photos of her hugged up with Lil Wayne in contrast with quiet alone time with the man she loves. Amazingly, none of her infamous headlines or the cover of the the book The Art of Mackin' make it into the video. Hmm...wonder why?

Sadly, the video is ultimately tedious and unflattering. It's pretty much three minutes of Farrah smizing like a graduate of the Barbizon School of Modeling and awkwardly swaying back and forth against a white background (she has less enthusiasm than Mariah Carey in her Vegas show). There was no magic and she probably would have looked better if  she wasn’t wearing any makeup. We're not sure who was on duty to beat her face, but she looks like Hottie from Flavor of Love. As well, our boy Andra Fuller, from Black Jesus and The Game, makes an appearance as her love interest in a few charming and intimate scenes. But, while there was some chemistry between Franklin and Fuller, those scenes are so few and far between it barely makes a difference. In fact, the scenes feel like they belong to a completely different video — a video that isn't boring.

There are a number of things we could say about Farrah, this song and this video — but we won’t. In all honesty, it is way too easy to dish on Farrah Franklin and her strides for fame. She’s putting herself out there for our love and our ridicule and far be it for us to continue kicking the girl while she's down. We’ll leave that for the folks in the comments.