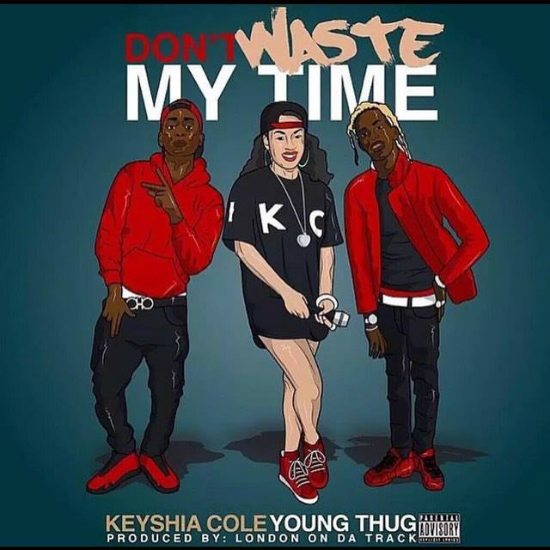 Keyshia Cole is back and pretty much over it and she's singing about it in her latest single "Don't Waste My Time." Featuring southern rapper Young Thug, the track, produced by London On Da Track, is a radio-ready R&B single about a love that's run its course. "Can't kick it how we kick it / We tell a trick to kick the rocks / I see the bulls**t and I dismiss it / I done been through a lot / I done been around the block," Keyshia sings. Basically she's no longer here for your shenanigans so don't try it. Young Thug does try it, though, as he supplies his slurred bars on the single to add a barely audible male perspective to the track. We wish we could tell you what he said, but just know that it wasn't that deep. London's production however ensures the track is a smooth listen and snap-worthy enough to play again.

After releasing six albums on Interscope Records, Keyshia will release her seventh album independently. The songstress has been working with London on the new project while he and Thugga just released their collaboration Slime Season a few days ago. Keyshia promoted her new track with the duo on Instagram yesterday, stating the first single was coming but that this one was for "the streets." Keyshia also encouraged fans to join in on the fun by sharing what wastes their time with the hashtag #DontWasteMyTime. Since time is of the essence, listen to "Don't Waste My Time" right here while we wait for her new album and maybe more street cuts.


TAGS:  audio, keyshia cole, London On Da Track, young thug
Previous: Tweet Comes Back Strong On ‘Won’t Hurt Me’ Next: CeeLo Green Finds Light In The Darkness On ‘Music To My Soul’