Miguel Keeps It ‘Simple’ On ‘The Tonight Show’ 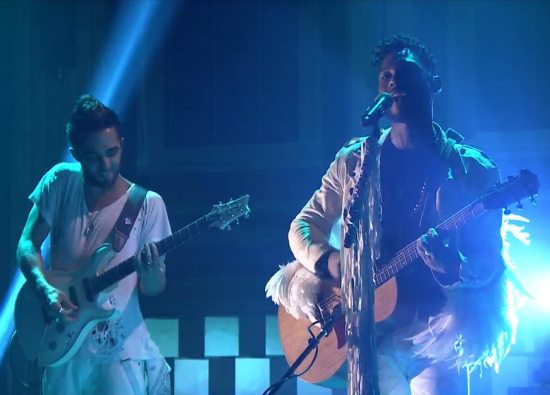 Last night, Miguel popped up on The Tonight Show Starring Jimmy Fallon to perform his Wildheart single "Simple Things." Miguel looked heavenly during his performance, baring his chest and rocking a cream and white fringed leather outfit with his guitar in tow. The L.A.-bred singer had the NYC audience in his pocket as he effortlessly cooed about the simple things he desires. With only a percussionist and bass player assisting him, the stripped-down performance gave us just enough to press the replay button and experience the stellar song all over again.

If you can't get enough of Miguel like the rest of us, The Tonight Show crew got some bonus footage for a web exclusive where he what his first album was. Miguel gleefully expressed his love for Boyz II Men's Motownphilly and how it changed his life when he was the tender age of nine. He shared a fun anecdote about buying the album with his birthday money, and called the group "damn near perfect."

Besides his musical tastes, you can learn more about Miguel from his newly launched Pinterest page, which includes his Wildheart Tour fashion. From his impeccable vocals to his sincerity during interviews to his fashion sense, Miguel is clearly a man after our own hearts. If you haven't copped Wildheart yet, it's not too late to slide on over to Amazon or iTunes.


TAGS:  boyz II men, miguel, The Tonight Show Starring Jimmy Fallon
Previous: Tamar Braxton’s ‘King’ Reigns On ‘The Real’ Next: Are You Ready For Zoe Saldana To Hit The Big Screen As Nina Simone This December?