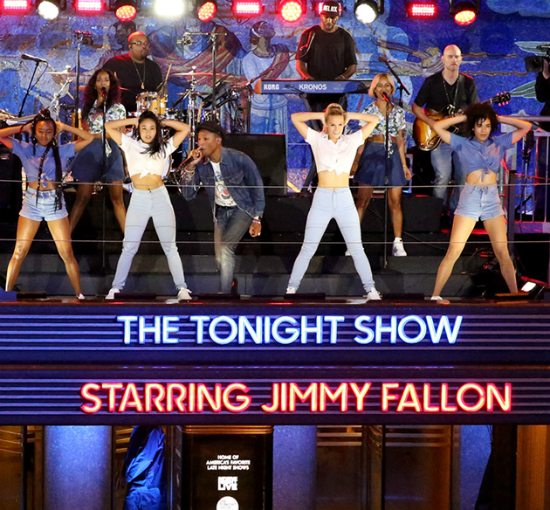 Pharrell Williams took over 30 Rock this past Friday night, when he performed on the The Tonight Show Starring Jimmy Fallon marquee for the first time. Fallon first lit up the marquee at the end of 2014, and who better to christen it than singer/rapper/producer Pharrell? The "Happy" singer entertained the rained-on New York City audience by spreading the gospel of his latest single "Freedom." True to his past live performances, Pharrell began his performance with a few encouraging words, this time telling the audience, "You know why I love New York City? Because you guys make no apologies for who you are." Backed by a band and group of dancers, Williams used the tight space strategically and performed the single with choreographed moves and enough energy to keep the New York City lights on. Pharrell rocked Rockefeller Center and had the audience swaying and clapping the entire time.

Along with his live performance rounds, Pharrell will perform at the Apple Music Festival in London on September 26th. But first, he'll return as a coach for the ninth season of the The Voice on September 21st. Skateboard P is the perfect mentor since he has a knack for creating songs that resonate even more when performed, with the ability to touch the minds and hearts of many. Less annoying than "Happy," "Freedom" comes off as a motivational chant, pointing us in the hopeful direction we need to go in the world. Until we get there, you can rock to Pharrell and watch his performance right here.