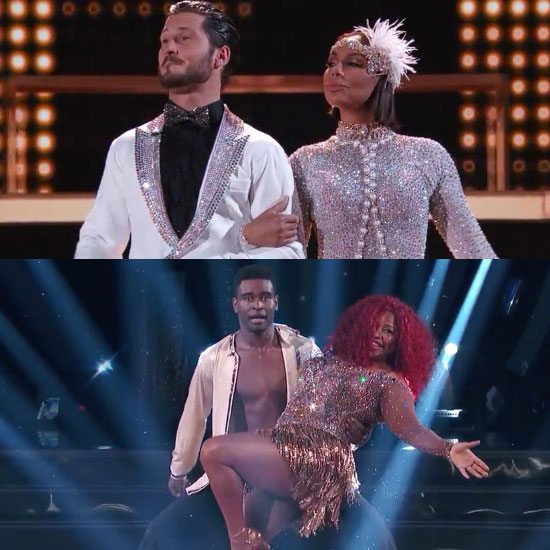 Season 21 of Dancing with the Stars premiered last night to much fanfare and scrutiny with a cast of real-life characters such as Gary Busey, Paula Deen and Kim Zolciak (of Real Housewives of Atlanta infamy) taking the stage to hoof it up. Music lovers, however, were tuned in to see two R&B divas duke it out on the dance floor with Chaka Khan and Tamar Braxton on deck to step in the name of love.

First up was Tamar, who may just be the busiest woman on TV right now, with her talk show The Real also returning for its season premiere yesterday, her reality shows Braxton Family Values and Tamar & Vince still going strong and her album promotion for Calling All Lovers about to go into overdrive. But last night it was all about her Quickstep with partner Valentin Chmerkovskiy, and Tamar slayed. She kept her over-the-top antics to a minimum -- although we fully expect when she dramatically said "She came to DAHNCE, honey!!" during a practice session to become the next popular saying that Tamartians latch on to -- and she really did come to dance. In less than 60 seconds the youngest Braxton and the returning champ got all the way live dancing to the house band's version of "Do Your Thing" by Basement Jaxx in an extremely impressive first dance.

The woman who's so nice you gotta say her name twice, Chaka Khan, wrapped things up with her tall, dark and handsome partner Keo Motsepe. The two had great chemistry as they danced the Cha Cha to Chaka's hit song "I Feel For You" performed by the house band. Chaka descended from the ceiling with her fiery red hair as big and bold as ever and draped in a shiny, glittery robe that she took off once she landed on stage only to reveal more shine and glitter from her dancing costume.  Keo bodyrolled his way to Khan, and they started dancing. Chaka tried her best to keep up with the steps and arm movements but faltered a bit. But she kept it entertaining and even incorporated her signature Chaka Shimmy to make this Cha Cha hers.

After the season 21 premiere episode, it's safe to say that Tamar Braxton is an early favorite to win and 62-year-old Chaka Khan is going to shimmy into the hearts of many.