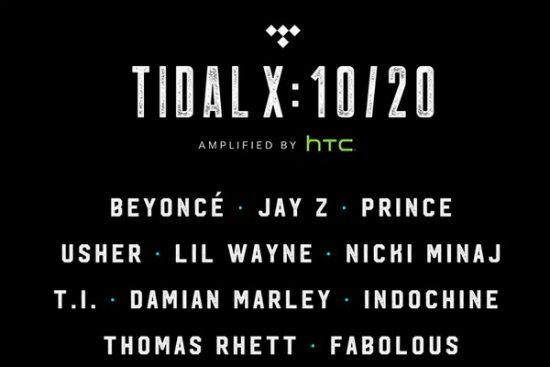 To celebrate reaching the milestone of one million subscribers, the oft-maligned streaming music service TIDAL is throwing a big concert in October and everyone is invited. Dubbed TIDAL X: 1020, the concert will naturally take place on Tuesday, October 20th in Brooklyn, NY at Barclays Center and the lineup is a pretty big deal. Scheduled to take the stage are TIDAL head honcho Jay Z, Beyoncé, Prince, Usher, Lil Wayne, Nicki Minaj, T.I., Damian Marley, Fabolous and rising stars such as Alessia Cara and Justine Skye. And these are just some of the performers who've been announced thus far.

All these and more acts on a Tuesday night? Anyone who plans to attend might also plan to skip class or call in sick to work the next day, so start thinking of your excuses and work on hooking up a doctor's note now. Everyone else who won't be in attendance -- TIDAL subscribers and non-subscribers alike -- can catch the worldwide livestream of the concert on TIDAL.com or via the TIDAL app.

If TIDAL X: 1020 sounds like your type of hype and you want to be there at Barclays Center to take it all in, then tickets for the general public go on sale starting Friday, October 2nd at 12 noon ET through Ticketmaster. Those one million TIDAL subscribers have the jump on everyone, however, with early bird tickets on sale for them right now.

When you fork over your coins for tickets, at least you'll be doing so for a good cause and not just making the artists richer. According to TIDAL, 100% of ticket proceeds and donations will benefit charity and be administered by the New World Foundation. A concert for a cause? Even if you're not a fan of TIDAL, you can't beat that.