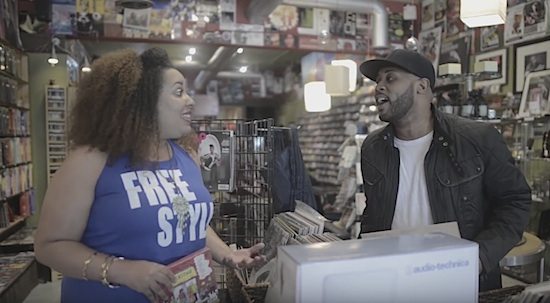 In between recording and touring with jazz supergroup Incognito, making music with Oli Lazarus as one-half of Reel People and collaborating on projects with other artists, our man Tony Momrelle still manages to squeeze out a solitary album here and there. As he preps for the October release of his third (full-length) solo outing Keep Pushing, he teased fans earlier this month with lead single "Pick Me Up."  As a bonus, the  sunny, vintage-soul tune came with a special B-side track -- a cover of Roberta Flack and Donny Hathaway's "Back Together Again" with Chantae Cann.

Known for her amazing collaborations (The Foreign Exchange, Robert Glasper, Snarky Puppy and Jonathan McReynolds, to name a few), Cann brings a soulful effervescence to the song that beautifully complements Momrelle's passion. Adding to our excitement about the duet and forthcoming album release is the video for the song.  Starting out in London (with a cameo by Incognito frontman, Bluey), Tony quickly heads to Heathrow to jet across the pond and join Chantae in Atlanta.  The two meet up at popular spot Moods Music, singing and perusing some of our favorite albums (love the Authenticity nod), before heading to The Fox Theatre to meet up with the band for a sound check before the show. We are loving their rendition of this classic, and with chemistry like this (in studio and on-screen), here's hoping this won't be the last time they get "together."

After grooving along to the bounce-worthy remake, scroll down for a full album preview. "Pick Me Up/Back Together Again" is currently available for purchase as a maxi-single (featuring remixes by Richard Earnshaw and Opolopo) and Keep Pushing is currently available for pre-order. As for Chantae Cann, in addition to working on her solo debut, she recently launched #UrBrave is Beautiful campaign to raise awareness about Huntington's Disease. Visit the website for more info and to support this worthy cause.