Jody Watley & Shalamar Are Reloaded And Ready To ‘Slow Dance’ 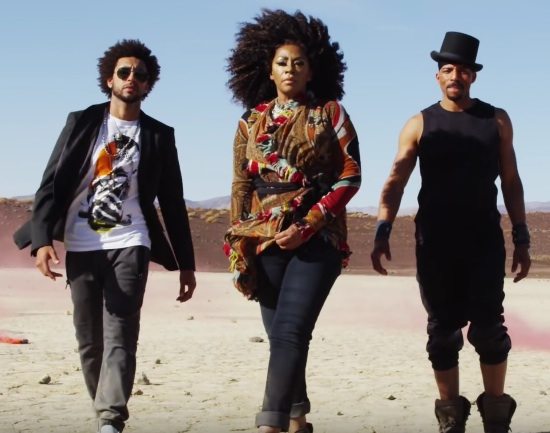 Jody Watley isn't looking for a new love anymore, but she has found two new partners to join her in bringing Shalamar back. Shalamar, the famous R&B group from the '70s and '80s, is given new life with the addition of Nate Allen Smith and Rosero McCoy. Jody is in the center of it all, still looking and sounding as fabulous as ever in their new music video for their new single “Slow Dance.” In a note attached to a behind-the-scenes video on Facebook, Shalamar stated, “...we know some people yearn for the past, but this is now.” The group certainly attained their goal of moving forward with a current sound and look to please old and new fans alike.

Damien Sandoval directed the music video, set in the Mojave Desert. The concept is pretty simple: The three band members stand side by side as they belt out the lyrics. The dancing that was so important to the original group is present here as well, as Shalamar performs clean, choreographed moves while being circled by the camera. The aerial shots along with the panning in and out is reminiscent of the music videos for '90s R&B classics such as Boyz II Men’s “Water Runs Dry” and Jodeci's "Cry For You." In fact, the music video and the production of the song seem to be an ode to the good old days as Shalamar sings “Does anybody slow dance any more?”

While the revamped Shalamar stays true to some of the classics that made the band name famous, “Slow Dance” is an excellent example of how the group is combining their collective talents -- including Watley’s massive reservoir of knowledge from her 40-plus years in the music industry -- to create a new musical experience. This track is modern in its own way but still brings back the memories of when there was romance in the club, when there were plenty of slow jams and opportunities to slow dance.

"Slow Dance" will be officially released as a single on October 20th. Shalamar has not announced any future musical projects yet, but the trio will continue to perform and tour for the rest of the year, including upcoming concerts in the Washington, DC area in November. Check out their tour dates on their website, and stay updated on Shalamar's future projects through SoulBounce.