Kendrick Lamar Brings ‘These Walls’ To Life At The Kennedy Center 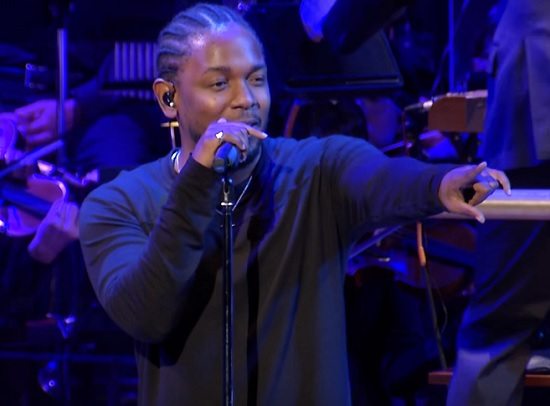 Last night was a legendary night for hip hop as Kendrick Lamar took the stage at Kennedy Center with the National Symphony Orchestra Pops to perform a few of his hits and album cuts from his current masterpiece, To Pimp a Butterfly. Unfortunately for many, the tickets for the performance were in such high demand that they sold out in seconds, leaving more than a few K. Dot fans out in the cold. Perhaps the Kennedy Center felt our collective pain, as they've quickly released video of the rapper performing his intimate track "These Walls" shortly after the performance ended.

In the clip, a confident Kendrick rocks all black and cornrows as he draws in the audience with the song's laid-back vibe. Though Anna Wise and Bilal weren't in attendance, Kendrick made due with a recorded track of their vocals as the symphony built upon the lush sounds of the song, amplifying the strings and musical cues to enhance the lyrical storytelling of Kendrick's verses perfectly.

Unfortunately, this is the only official clip from what was surely a dynamic performance. However, if you're looking to take in Kendrick on stage, be on the lookout for dates and venues for his Kunta's Groove Sessions series, which will be hitting numerous cities this fall. Take in "These Walls" right here and check his website for upcoming tour dates near you.