SoulBounce’s Class Of 1995: Adina Howard ‘Do You Wanna Ride?’ 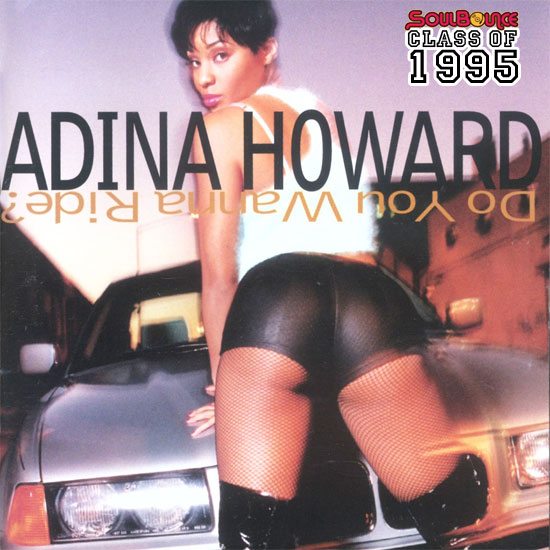 No matter how hard you tried, you likely failed to escape Adina Howard’s ubiquitous and anthemic “Freak Like Me” in 1995. “Escape” may be too harsh a word, but the song was plastered on radio and music video outlets, helping it rise to No. 2 on both the Billboard Hot 100 and Hot R&B charts, and peak atop the Rhythmic Top 40. Tame by today’s standards, the raunchy lyrics paired with a hump-tastic music video to secure Adina’s place as the head “dog” in charge when it came to female sexual prowess and fantasy — and served as one of the key entries by a now-signature act in the “freaky R&B” niche, then dominated by Jodeci, R. Kelly and Silk.

True, SWV and Changing Faces dipped into suggestivism with “Downtown” and “Stroke You Up,” respectively; and Adina’s full-length debut, Do You Wanna Ride?, existed in an era post-Madonna’s Erotica and Janet Jackson’s janet., both of which found lady singers pushing sexual boundaries within the mainstream. But Adina drew a particular ire and praise in a tomāto-tomäto conflict between feminists who took issue with her lyrical content and those who claimed her approach was feminist because it preached confidence and control.

But no matter which side of the argument listeners took, collectively, it seemed, they interpreted her act as a gimmick. No doubt the public found it difficult to accept her as a serious artist due in part to the racy album cover Do You Wanna Ride? donned and the album-leading song, “You Got Me Humpin’,” which she co-wrote. A near-continuation of “Freak Like Me,” the Michigan native adopted G-funk bass and additional percussion to croon not-so-subtle missives to her man of the moment over a thick melody as street as the guest rap’s lyrics (“Fly little honey with that West Coast flava / She told me to leave a 6-9 when I paged her”).

But those slow jams paved the way for Adina to cruise smoothly into her other niche: lust-filled balladry. This is especially true on the title track, “Do You Wanna Ride?” Sounding as though it were penned by then-fellow newcomer Montell Jordan, “Ride” encapsulates mid-’90s phone play with body roll-worthy smoothness, with “freaky,” “bump ‘n’ grind” and “do me” dropped throughout the track for sex-jam authenticity. The album’s second single, “My Up and Down,” featured a mid-tempo melody underneath its risqué message, and found a perplexed Howard wondering why this man — who said “you were happy / With your wife and happy home” — would have the “time to hang around / For my up and down.” #Truth. Not to be excluded is “If We Make Love Tonight,” on which a pondering Adina questions the possibilities of she and her best friend — who happens to be a guy — crossing the line to become romantically involved.

It’s not all serious, though, as evidenced by the Yo-Yo-assisted “You Can Be My N***a.” An “I do what the hell I want to do” type song, Adina declares her independence while simultaneously stating she can occasionally deal with a boyfriend — an epiphany that likely became clear after the haze described in the lines, “As I lay here / Just smokin’ on a blunt / The situation is getting blurrier and blurrier.” More ’hood humor can be found on the silly interludes “I Wants Ta Eat” and “Let’s Go To Da Sugar Shack,” which could easily have been leftover In Living Color skits.

Though co-executive producer Livio Harris — who, as a point of reference, sang background vocals for H.W.A. (that’s Hoes With Attitude), among other credits — left his fingerprints all over Do You Wanna Ride?, there was still room on the set for singer-songwriter Andrea Martin’s co-penned “It’s All About You” and the sultry album closer “Baby Come Over.”

Do You Wanna Ride? can be considered a solid debut. With Adina in on the jokes, and her willingness to showcase vocal strengths and vulnerabilities, she amassed an almost cult-like base of fans who appreciate the disc and would take things a step further to hail it as a classic. Which it kind of is, considering that it bridged the Erotica and janet. eras to the raunchier additions that would hit shelves the following year — Foxy Brown’s Ill Na Na and Lil Kim’s Hardcore — in the ever-growing catalog of boundary-pushing music from female artists.

And those who thought Adina was a gimmick were shown in later years — thanks to singles “(Freak) And U Know It,” the Jamie Foxx-penned “T-Shirt and Panties” and the slow-burning “Nasty Grind” — that she was clearly in her lane, opening the floodgates for contemporaries such as MoKenStef and Nuttin’ Nyce to get in on the act. Adina Howard and Do You Wanna Ride? may seem like unlikely inclusions in the canon of classic artists and albums, but the tastemaking status of each is undeniable.