Talib Kweli & Rapsody Take Us On A Trip To ‘Every Ghetto’ 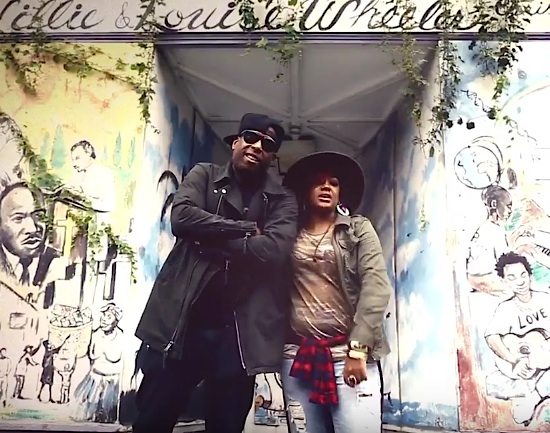 After lighting The Tonight Show Starring Jimmy Fallon on fire last week with the debut of the single "Every Ghetto," Talib Kweli and Rapsody are back with the song's equally fiery music video. No, the pair aren't literally lighting anything on fire, but they're both spitting hot fiyah with powerful lyrics and images to match.

Some depressed areas of Cincinatti, OH serve as the backdrop in the Cam Be-directed visuals that begin with an older, toothless woman with a beer in hand rapping. Despite her appearance, she is actually not too shabby with her bars, and in another life she might have been a star had she not fallen on hard times. Who knows her story, but there are so many to be told in the ghettos of America and "Every Ghetto," produced by Hi-Tek and taken from Kweli and 9th Wonder's upcoming Indie 500 collaboration, shines a light on but a few societal ills and issues.

Throughout the video, Talib and Rapsody are seen either rapping in the streets and on stage. Whether in front of a liquor store or hugging the block, they're surrounded by their crew and quick cuts of various city scenes and shots of people are mixed in to make it exciting. Blink and you might miss Hi-Tek's cameo, but you won't find 9th in this video at all, which was a little strange, but his absence doesn't make or break things. Nonetheless, "Every Ghetto" the song already had us open and the video builds on that, getting us good and ready for more from Talib Kweli and 9th Wonder's Indie 500 album, which hits stores on November 6th and can be pre-ordered right now on Amazon or iTunes.


TAGS:  9th wonder, Cam Be, hi-tek, rapsody, talib kweli, The Tonight Show Starring Jimmy Fallon
Previous: Puff Daddy & The Family Show Us What They’re ‘Workin” With Next: Morning Soul: She Made Us Drinks To Drink, We Drunk ‘Em