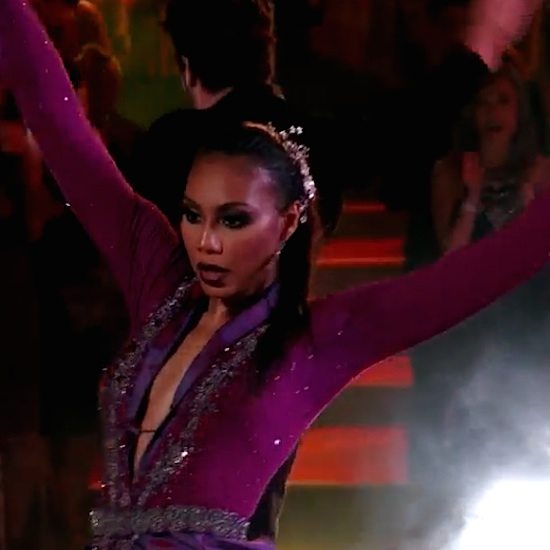 Last night's Dancing With the Stars was a monster's ball for their Halloween Night episode. The guys, gals and ghouls came out to dance for their lives and survive to make it another week on the show. After her stunning performance last week channeling her inner Janet Jackson, our girl Tamar Braxton was out for blood this week to stake her claim as a top contender despite the judges often heaping praise on other contestants and not her. Tamar knows what's up -- she's called herself the best dancer in the competition, and we're hard-pressed to argue with her -- and she clocked in another frighteningly fabulous dance with partner Val Chmerkovskiy this week. They were joined in the freaky funhouse themed Foxtrot by another couple of dancers who interacted with Tamar at the beginning and end of the performance in a very sultry way. The youngest Braxton played the role of devilish temptress to a T, and cut a serious rug with Val when she needed to. Which is why when she got harsh criticism about not connecting with her partner and the lowest marks of the night from the judges panel, she wasn't buying or feeling it. She wasn't alone, her co-hosts from The Real were there to support her and gave the judges gas faces and side eyes from the audience.

Tamar later performed in the group dance with fellow contestants and their partners -- Nick Carter, Sharna Burgess, Andy Grammer, Allison Holker, Hayes Grier and Emma Slater -- on Team Nightmare and they collectively received a perfect score. We don't know if that'll be enough to save Tamar along with the public's vote next week, but we're hoping to see her take it all the way to the Dancing With the Stars finale.