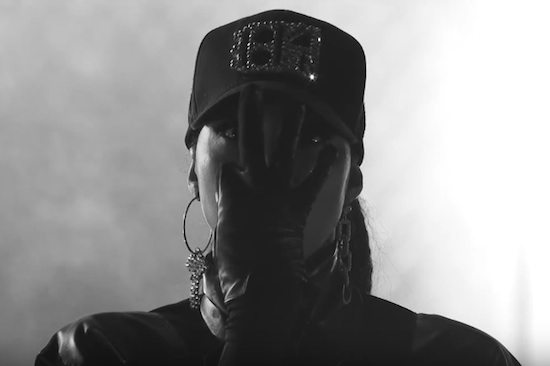 The Dancing With the Stars producers clearly saved the best performance for last yesterday when they decided to end the episode with Tamar Braxton. On a night that was devoted to famous dances, Tamar battled back from illness, getting low scores the previous week and being separated from her regular partner Val Chmerkovskiy to take Dancing With the Stars on a slaycation with her homage to Janet Jackson's "Rhythm Nation" music video choreography. Tamar looked the part in full Janet "Rhythm Nation" garb from her 1814 hat to combat boots, and when she stomped her way on stage flanked by background dancers with militaristic precision while the screen faded to black and white, she meant business. Chmerkovskiy choreographed an impressive routine that built on the "Rhythm Nation" choreo and added partner and Jazz dancing elements to it. And our girl Tamar nailed it. She impressed the judges to the tune of perfect 10s across the board, her first time managing that feat and putting her in a three-way tie for the top spot.

While Tamar stole the show for us, there were a few other performances of note that caught our eye on last night's Dancing With the Stars. Actor/singer Carlos PenaVega and his partner Witney Carson got down and dirty with their Rumba in their recreation of the strip club scene from Magic Mike set to Ginuwine's "Pony." PenaVega had moves and muscles for days and nights. Taking us to the '70s with their Saturday Night Fever-inspired routine was Backstreet Boys member Nick Carter and his partner Sharna Burgess. Their Samba to "You Should Be Dancing" by Bee Gees was sweet, but the set flipped to look like the discotheque John Travolta himself danced in was sweeter.

Watch Slaymar do Queen Janet justice right here, and check Carlos and Nick's routines out on the next page.