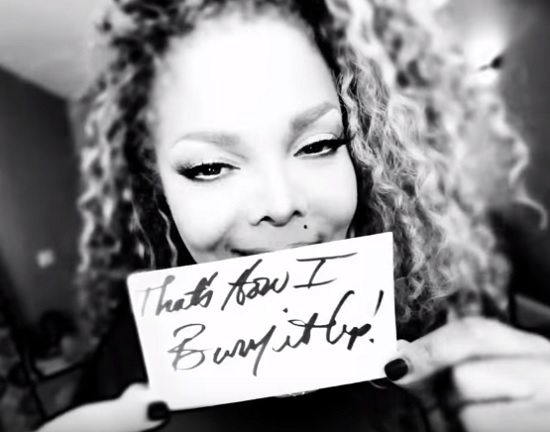 Janet Jackson's Unbreakable has finally arrived! While we're sure many of you are still either glued to your headphones or coming off of an all-night listening session (we know it's not just us), we'd like to pry you away for just a moment for some other Janet-related goodness: The lyric video for Unbreakable's current single "BURNITUP!."

The Missy Elliott-featuring heater is a fun, funky and fantastic club track from the woman who will always be queen of our dance floors and the lyric video shows just how fun it can be. In the clip, we see the newest collection of Kids (what Janet calls her dancers) and even a few musicians (we see you drummer Lil John Roberts and Daniel Jones on keys), behind-the-scenes personnel and Janet herself holding up pieces of paper with the lyrics emblazoned on them in thick, black marker. The cue cards are helpful, as it turns out they clear up a lot of confusion regarding the song's lyrics (contrary to Genius and a lip-synching Sean Hayes, Janet doesn't say a swear in the first verse) and give us all a chance to sing along while we shake our thangs on the dance floor. The clip also gives those of us who haven't seen her blockbuster Unbreakable World Tour up close and personal a chance to get in on the fun of the tour with footage of the crew getting ready and even a few seconds of Janet shutting down the stage.

You can check out the full lyric video right here. And, as if you didn't know, Unbreakable is officially on sale today, so get to buying.