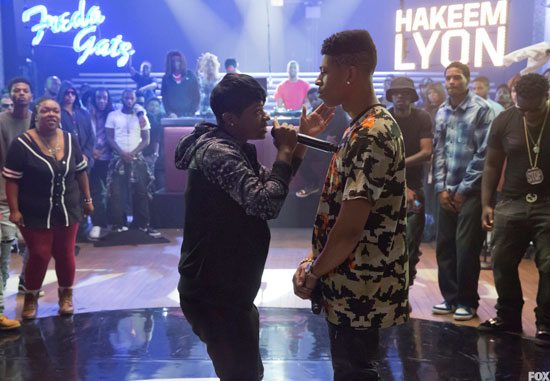 Lucious has Thirsty and Andre over for tea and crumpets to find out what dirt Thirsty has dug up on Jago only to learn there is none. Andre thinks they should keep it moving and nix the deal, but Lucious is adamant that Empire acquire SwiftStream and get into the streaming game. Andre convinces Lucious that they can only move forward with Mimi in the mix and they all drink to that.

Anika shows up without an invite to Hakeem's place and barges in. He is unbothered when she tries to hug and kiss him, and he plays it off like he's got a lot on his mind (which he does but when has that ever stopped him from getting some Boo Boo Kitty before?). She walks over the his bar, pours herself a drink and just as she's about to take a sip, she remembers that she has a baby on board and gives the drink to Hakeem. In an effort to get that old thing back, Anika straddles Hakeem and starts kissing on him to soften him up for the baby bomb she's about to drop. Hakeem has another idea and he doesn't even want her on him like that, physically moving her from on top of to next to him on the couch before declaring that he thinks he's in love. Anika can't believe what she's hearing, but her face really cracks and falls to the ground when Hakeem calls them "homies." After hearing that, she chooses not to share her news and roll out with what's left of her dignity.

Jamal pays a visit to Lucious in the Empire offices and wants to share the song he's been working on with Cookie on the low-low with him for his feedback. Surprisingly, Lucious digs it. The next stop is a recording session with a full band and string section who are playing the track. Cookie strolls in and starts giving her two cents before Lucious slinks in and the jig is officially up. Jamal tries to reason with his parents who are going off on each other that their two songs could blend together to create something even better. Cookie and Lucious agree but then the musicians start playing the revamped track and it sounds like the hottest of messes. The two of them get to arguing again, and give Jamal an ultimatum that he needs to choose which one of them he's gonna work with. Jamal storms out and the studio session is a wrap. On their way out, Cookie and Lucious decide to place a little bet on their sons -- if Hakeem wins the rap battle then Lyon Dynasty will get to release Jamal's next album and if "Freda Wack" wins then Empire gets Hakeem back.

Cookie runs to the Lyon Dynasty camp to make sure that Hakeem's battle rap is tight and his crew gives him words to freestyle with. Across town, Freda and her goons are doing the same thing. This freestyle montage is about as hard as cotton balls, but you can't tell either rapper that they're not killing. Bless their hearts.

Jamal and Hakeem share some brotherly time and counsel each other. Hakeem is the unlikely voice of reason for Jamal about how to deal with their parents, and Jamal gives his younger brother pointers on how to approach this battle like a show. We'll see if they end up taking each other's advice.

At Lucious' office, Jago and his lawyers are there and ready to make a deal, but Mimi is nowhere to be found. Jago is tired of waiting, and he's ret ta go. Lucious tries to play it cucumber cool sucking on a lollipop like an around the way girl, but Thirsty is ready to pull the plug also (he has way too much say for someone who's been involved with Empire for 15 minutes). Just as Jago is about to roll out and take SwiftStream with him, Mimi waltzes in and is ready to sign on the dotted line. Lucious plys hard to get, but he finally signs the paperwork as well. Finally!

It's time for this song that Jamal has been working on for Pepsi to be debuted and he invites his parents to the mini-concert. They pitch a fit to be in the same room together much less sit next to each other, but Jamal makes them play nice -- even if they're cussing under their breath. Jamal starts performing and we hear that he did in fact combine both songs and it doesn't sound as horrid as it did before. After the show, Cookie and Lucious get back to arguing and Jamal tells them to get over themselves because he wants them both to produce his next album whether they want to or not. (He told them!) The Pepsi rep then walks in to deliver the good news that Jamal is the chosen one to experience the joy of Pepsi.

Now that Jamal is squared away, it's time for the epic rap battle between Hakeem Lyon and Freda Gatz to pop off. Legendary DJ Funkmaster Flex is the master of ceremonies, and Hakeem makes a grand entrance on CP Time. Funk Flex drops a beat, and Hak rocks it first but Freda admittedly rocks it best. It's not until the second beat -- the instrumental to Craig Mack's "Flava In Ya Ear" -- that Hakeem comes up and slays Freda (if the crowd's reaction is to be believed). He ends his fiery rap by denouncing his last name and taking a mic stand to the marquee with his name in lights. He declares that from that night moving forward that he is dropping his last name and will only answer to Hakeem. In yo face, Lucious!

While the elder Lyon is getting publicly embarrassed by his youngest cub, he has a flashback to when he was a child. We see Young Lucious wrapped up in a blanket and sleeping on the street underneath a lion statue. There's no sign of his mother, played by Kelly Rowland, but we know what this child's destiny is.

Back at the rap battle, Hakeem No Lyon is declared the winner by unanimous decision by the crowd. Hakeem gets some love from Cookie and Jamal and they all roll out to celebrate. Andre joins them at the club to pop bottles, but shady boots Lucious also invites himself and can't wait to throw salt on Hakeem's win mentioning the bet that he and Cookie made. Jamal pulls his pop to the side and tells him to find some chill so that they can enjoy this moment. The enjoyment is short-lived, however, when Cookie's oldest sister busts up in the club looking for her and calling her out her name. Who is Loretha?

Security escorts Candace, played by Vivica A. Fox, to the curb and Cookie goes outside to see what all the ruckus is about. Cookie is not here for Candace's fake-ass shenanigans, until she informs her that their other sister Carol has gone on a bender and left her kids behind. The two sisters exchange some heated words and the best dialogue this whole episode and join forces to take a trip to Philly to find their sister.

Jamal, meanwhile, is being the perfect gentlemen and escorting Laura to car waiting outside to take her home. They share a sweet goodbye kiss, which might very well be their last goodbye when it's revealed that the driver of the car is Boo Boo Kitty wearing a blonde wig as a disguise! What kinda Uber is this?

Will Laura make it home it one piece? Will Cookie and Candace find Carol? Will we find out who Loretha is? These questions and more may be answered during the next episode of Empire, and we'll be tuned in on Thanksgiving Eve to find out and to see Alicia Keys make her debut as a new character.