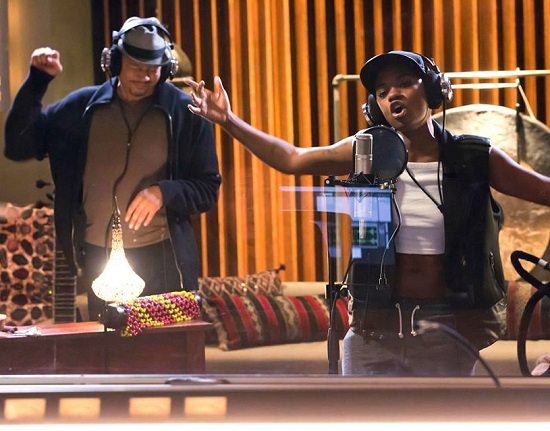 While Andre has yet another crisis of faith, Hakeem enlists Tiana (oh wow, they actually remembered she's on this show) to help Laura find her inner star. She disappears after giving the lost child pointers on her walk, but screen time is screen time. Cookie, on the other hand, is getting all dolled up herself. But it's not to impress some man (after three days in the sack, she should be tired), it's to go have a clandestine meet-up with Jamal. He's nabbed a spot a Huey Jarvis' much ballyhooed living room performance series thanks to his mom's help with his new joint "Heavy." They order up some bubbly and toast it up to celebrate. Their drunken revelry leads to the twosome heading back to Lyon Dynasty to mischievously lay down more of the track. They work through the night perfecting the tune, forgetting that they're supposed to be in a bitter feud. They're reminded of the fact, however, when Hakeem comes in a bit earlier than expected, sending Cookie to distract him while Jamal sneaks off like the two were on the late night creep in one of the more fun moments of the episode.

Andre isn't having much fun, however, as he revisits the spot of his attempted suicide to contemplate what his father has asked of him. Suddenly, his pastor (who may or may not be a figment of his imagination) appears to help him through his dilemma and gives him some un-Christian advice. Once in the Assistant DA's office, he opts for blackmail instead of black...well, you know. Why this is more preferable in God's eyes than adultery we never get the answer to, though. Whatever the case, it seems to have worked so good job, we guess. He celebrates by running back home to Rhonda (oh hey, girl, we almost forget you were on this show) and giving her what the Assistant DA didn't get.

New terrible twosome Lucious and Mimi, meanwhile, head the boxing gym to talk with the owner of the streaming service they wish to acquire. For some reason, Lucious hops in the ring to spar with his potential business partner as they discuss what they can do for each other. In the course of the match, the streaming service's founder mentions that, while his beats are nice (lies), he finds Lucious' lyrics a little shallow (truth!). For some reason, this prompts another flashback and we see Lil Lucious putting bullets into a hole he's dug in his backyard. A now-pissed-off Lucious then knocks his opponent's lights out. So much for the merger.

In the meantime, Lucious is still trying to make "Boom Boom Boom" a thing with a sitar (we kid you not) when Jamal shares the big news of getting a spot at the Huey Jarvis showcase. Lucious feigns support, but by the look in his eyes, we know that he's seething a bit inside. Cookie's hot too, but for altogether different reasons. She's still in the midst of loving up on Laz, but she's also focused on finding a location for Cookie's Cookout. Laz, the snake he is, is more than happy to help, suggesting Rocksteady Park, which just so happens to be in his homeboy Big Heavy's territory. Surprise, surprise. After protesting, she agrees to meet up with Heavy and make some negotiations. Hakeem, on the other hand, is obviously hot for Laura and he's intent on making her the star he needs her to be. As a final test, he makes her perform randomly in public and grab the people's attention. Despite the fact that if this were really in New York (where this type of ish happens everyday), no one would give a damn, she draws a crowd and then locks lips with Hakeem in appreciation.

Lucious and Mimi burst into the streaming executives hospital room (Really, Empire?!) to try and renegotiate the merger between Swiftstream and Empire. Thanks to a morphine drip, they're successful. What also seems to be going successfully are Cookie's negotiations with Big Heavy. That is, until Hakeem busts up the party to flex his little bird chest. It's all for show, though, as he agrees to the arrangement. He also, surprisingly, offers Cookie some sound advice, telling her to keep an eye out for Laz.

Performing at Huey Jarvis' showcase, Jamal debuts one of the first likable songs from the show this season with "Heavy." His performance, however, brings Lucious into yet another of his flashbacks, with a split second of Kelly Rowland searching frantically for a bullet. Nothing good can come of that. But some good has come of Hakeem's coaching, as Laura is infinitely more feisty and take charge, fighting for her lead spot in Destiny's Child Thrice Removed and impressing Cookie in the process. Now if only they could get better songwriters, they might actually have something going.

Lucious and Mimi also have something going, picking and choosing girls at Leviticus to take back to Lucious' crib for the most devilish of three-ways. It soon devolves into crazy after Mimi gets a phone call that drives her to tears. Lucious quite strangely intervenes before trying to get things going again with Mimi, himself and their invited partner. But just as the getting seems to be good, he notices the revolver tattooed on the girl's inner thigh. This finally brings his flashbacks full circle, and we see that his mother liked to play Russian Roulette in front of him. And we can only assume that at some point she must've been successful. Lucious, seemingly finds inspiration and cuts the threesome shenanigans short (thank God) to have a late night recording session of "Boom Boom Boom Boom" with Freda (dammit!). But this time, he adds a few extra sound effects with the gun. Instead of running from the crazy man with the gun, Freda is all about it and it seems like the song might finally be the hit he was trying to make it (suspension of disbelief, folks).

And with that, this episode of Empire goes out with a bang. What other twists, turns and implausible conclusions will the Lyon clan go through next? Tune in next week to see and then come back here for our recap.