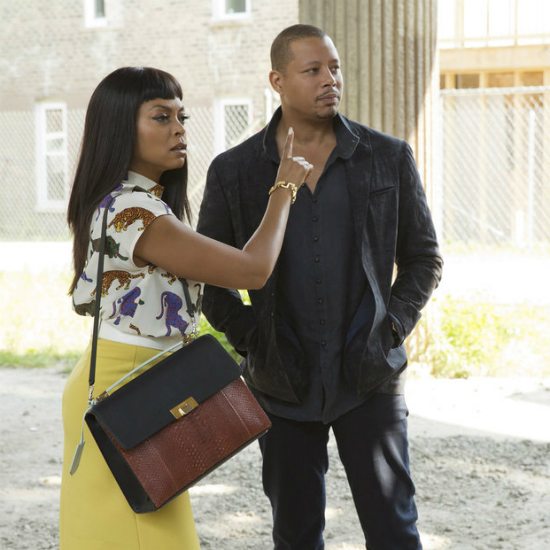 Two weeks ago, our favorite musical  soap opera left us on quite the cliffhanger, as Hakeem Lyon was kidnapped by unknown assailants and put into the back of a black van. We also saw Jamal's boyfriend Michael cheat on him with the male version of Superhead, Andre get baptized and Lucious relive another painful childhood memory. Was this week's episode worth that two-week cliffhanger?

Episode 206: A High Hope for a Low Heaven

The episode picks up right at the end of the last episode with Hakeem being taken from the kidnapper's van into an abandoned warehouse.

Meanwhile, we see our girl Becky having a little midnight rooftop rendezvous with her new man. However, she can’t really enjoy her man candy because all of the Lyon family drama and her first day as Andre’s new assistant is on her mind.

Speaking of drama, Cookie is going through a bit of her own at Lyon Dynasty headquarters. No one can find Hakeem and his girl group, Mirage á Trois, aka Destiny’s Problem Child, is starting to get on her last nerve. Porscha, ever the go-getter, takes the initiative to spit a hot 16 in Hakeem’s place. Before Cookie can put Porsha in her place, she receives a FaceTime message that Hakeem has been kidnapped. Of course, Cookie thinks this is just another one of Lucious’ tricks.

But for once, it isn’t. Lucious is busy in the studio trying to help Jamal get his struggle notes together for a new song. However, Jamal just isn’t into it. He’s too hurt from his boyfriend Michael’s betrayal in the last episode. While Lucious tries to get the boy’s head back in the game, Cookie makes her grand appearance to confront Lucius about the kidnapping. He didn’t do it, but he thinks he knows who did.

Back at the kidnapper’s hideout, the three assailants talk amongst themselves while wishing they would have taken the more famous brother. Hakeem is watching them and notices they all have orange bull tattoos on their backs and calls them all some “punk ass cowboys.” Of course, the kidnappers take this opportunity to show Hakeem who’s really the punk and deliver a swift pistol whipping to the head. Meanwhile, Mama and Daddy Lyon are at the drop off point with the ransom money. Lucious is blaming Cookie for the kidnapping, telling her that the kidnappers are testing her and there might be a bigger plot afoot. Of course, Lucious would know because it sounds like a scheme he’d cook up.

While all these shenanigans are going on, Andre is at the Empire offices throwing his weight around as the new President of Gutter Life Records. He proposes to the boardroom that Gutter Life artists be more than thugs and hoods, but have to have some kind of character. As the roster of artist plays on the big screen we see Becky’s rooftop boo thang on the roster. Oh! He’s a gangster. “Gotta get a who?! Gotta get a what? Yo! Gotta get a ruffneck!”

Back to the kidnapping plot, Cookie and Lucious are waiting for a mysterious black van to show up with Hakeem. However, when the van shows up, Hakeem is nowhere to be seen. Instead, he paid the driver $1,000 to let him off on the street (so… the kidnappers didn’t take his money or phone?!), and he runs to the arms of Boo Boo Kitty. Yup! Just when we thought that plot line was over. Anika is going through her own trials and tribulations and is more than happy to welcome Hakeem with open arms.

When Hakeem finally makes his return to the stately Lyon Manner, he pretty much doesn’t want to be touched or talk to anyone. Though he’ll need a few stitches over his eye due to getting pistol whipped, his body is not worse for wear. However, his mind is fractured, experiencing voices, double vision and headaches. This causes him to lash out at his father and the rest of his family. Jamal, ever the voice of reason, says that Hakeem is probably embarrassed and just needs time to cool off.

Of course, everything isn’t A-OK with Jamal, either. The Staples Center wouldn’t book him because he’s gay. Apparently Empire’s marketing department is advertising him as a gay artist, which Jamal vehemently hates. He’s gay and he’s an artist, but he’s not a gay artist. Um, okay. Obviously in a need of a little help to get his point across, Jamal recruits one of Lucious’ old rivals, Jameson, to head his marketing efforts. Of course, Lucious doesn’t like this one bit and tries to expose Jameson as a gay rights political lobbyist. Jamal asks the two to put their differences aside for his sake and shake hands. Yeah, like that’s really going to make Lucious Lyon behave.

Elsewhere in the Empire offices, Andre is interviewing all of the artists on Gutter Life Records to learn more about their character and push his own Christian agenda. It’s pretty much a comedy of errors. Though they sit only on opposite ends of a table, they may as well be on different continents. The only person Andre is able to make a connection with is Becky’s Ruffneck, J Poppa. After exchanging a few Bible verses, Andre convinces him to embrace his religious side in his music.

Meanwhile, Cookie and Lucious are arguing about how to protect the boys and whether they’re strong enough to protect themselves. Lucious blames Cookie for Hakeem’s kidnapping and she needs his help. While what Lucious says may be true given all the security problems at Lyon Dynasty, he’s still Lucious Lyon and can’t be trusted. Cookie tells Lucious, “You ain’t a boss, you a busta,” grabs a bottle of champagne and makes her way out the door. While his parents are arguing over his kidnapping, Hakeem is still trying to deal with his anger over the situation, reliving the experience over and over in his head, going crazy and punching a mirror.