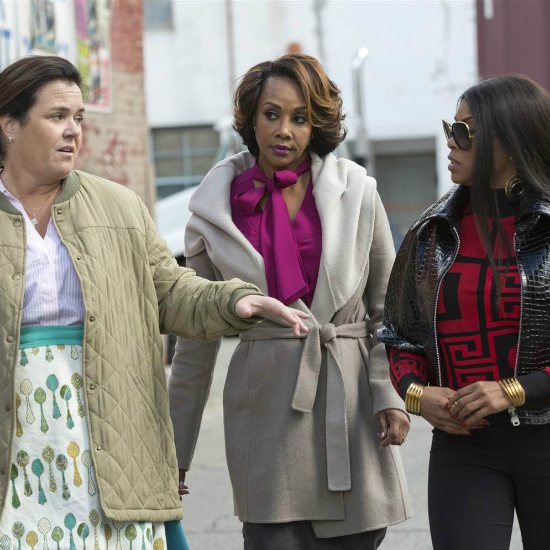 Cookie and Pepper meet up with Candace and go after Carol. They find sis laid out on a couch outside of a warehouse with a fellow junkie. After some fussing and arguing, Carol barfs on Candace’s shoes and begrudgingly gets in the damn car. The sisters take her to get something to eat at a diner and engaging in another argument over who's going to take care of her. Cookie gets Carol and Candace gets the kids in the divorce. After Cookie goes to the little girl's room, Candace warns Carol that if cookie knew what she did while she was in prison, it wouldn’t be such a happy reunion. And with that, the most entertaining part of the whole episode, Cookie and Candace talking junk back and forth, is over.

Lucious calls Hakeem over to Lyon Manor to try to convince him once again to sign with Empire again and take back his last name. This time for a partnership in the SwiftStream deal along with his brothers. Hakeem let’s him know this son can’t be bought and leaves.

Meanwhile, Skye Summers and Jamal are working on a new song together. Skye laments that she's only allowed to sing sorority girl break-up songs and not the edgy music she wants to. Skye is so jealous that Jamal has come out and singing his truth, and isn’t caught up in a box. And they thought this would be a good role for Alicia Keys? Hmmm...Jamal inspires her to bust through the box of girl power pop she’s known for and make the music she longs to create.

Over at Andre's place in Long Island, Rhonda and Boo Boo Kitty are sipping ice tea on the patio and engaging in a little girl talk. Unfortunately, that girl talk ends up being Rhonda co-signing Boo Boo Kitty's crazy by telling her to do whatever crazy ish she deems necessary to get her man.

Over at Lyon Dynasty,  Lucious surprises Cookie trying to get her to sign over her rights to his music. Cookie isn’t down for the deal, even if she becomes a partner at SwiftStream. Laz comes in and starts kissing Cookie passionately. Lucious sees Cookie with her new man, and remarks that it’s nice to see her sleeping her way to the bottom before making a dramatic exit.

Lucious isn't the only showing up unannounced and causing trouble for their ex. Anika crashes a party at Hakeem's place and says some pretty petty and disrespectful things about Laura and leaves as quickly as she came.

On the set of Jamal's Pepsi commercial, Lucious argues with Andre over getting Cookie to sign over the rights. Andre offers an alternative solution that includes selling off the sports management and other divisions of Empire. However, Lucious ain’t for it. Skye talks with Lucious about going in another direction, which pisses Lucious off even further. Finally, we get a surprise cameo from Empire creator, Lee Daniels, who is directing the Pepsi commercial, completely ignoring Lucious' ideas, causing Lucious' face to turn that unique shade of red. Lucious changes his mind and tells Andre its okay to sell off all the other divisions of the company to back the SwiftStream deal.

Back at Lyon Dynasty, Hakeem is going over the books with Cookie, but something isn't quite adding up with Laz, the concert and his crew. Lucious pops in and blows up Laz’s spot, calling him out as one of the Bully Boys. Laz tries his best to plead his case to Cookie that he really does love her, but it doesn’t work. She leaves him in the hands of Lucious, his goons and their guns. Relax in paradise, Laz. It's been real.

Meanwhile, Anika shows up to Hakeem’s apartment. Hakeem says she has a problem and needs to get help, while Anika counters saying that he was the one with a problem and it's admitting he's in love with her. She astutely points out that every time he has a problem, he runs to her. She tries to make Hakeem understand, but he's not feeling her or her obsession.

Back at the office, Cookie is having a breakdown about Laz. Carol tries to help but it turns into a conversation about Carol going to rehab. Carol says what happened with Jermel is messing with her. Cookie says s**t happens and it’s how you deal with it that makes the difference.

Just in time for the dramatic music to seal that moement, Skye and Jamal start singing their “edgy” song about change and living outside of the box and Malcolm X turning in his grave, causing cats throughout New York City to shriek in anguish. And what is this? Is Jamal putting the moves on Skye? Hugging her from behind and kissing her? And she let him! What does this mean? Does Jamal like WOMYNS, WOMYNS, WOMYNS now? We’ll have to wait until the next episode for answer to this cliffhanger.

On the next Empire, Naomi Campbell returns as Camilla to shake up Hakeem's world, Marisa Tomei is back as Mimi Whiteman to shake up Lucious' control of Empire and the Lyon family reunites for the big Fall Finale!