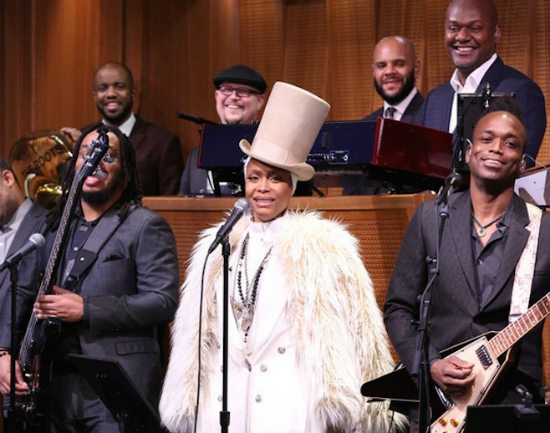 Erykah Badu caint stop, won't stop now that she's on a promo roll and taking her talents all over our TV screens this month. Ahead of her first-ever mixtape, But You Caint Use My Phone, Queen Badu stopped by The Tonight Show Starring Jimmy Fallon to hang out and perform wih The Roots crew. During the mini-sets, she served as guest musician and performed "Phone Down," Janelle Monáe's "Q.U.E.E.N.," "That Hump," The Roots' "You Got Me" and more. We know what you're thinking -- how is it possible that Erykah was only singing going into and out of commercial breaks and not performing center stage? While it definitely wasn't enough for us we know, it's all by design. With her versatile experience as a host, DJ and overall well-rounded performer, she rocked it all the same to celebrate the old -- her 15-year anniversary of Mama's Gun -- and to usher in the new -- her upcoming mixtape.

With her signature top hat, Mama Erykah did her thing rocking white and shades of beige effortlessly and rocking The Tonight Show crowd. If you need more Badu in your life, her mixtape But You Caint Use My Phone drops around Thanksgiving and you can catch her hilarious hosting of Centric's Soul Train Awards on November 29th at 8 p.m. ET. Give thanks for all things Erykah Badu, and watch her break it down with The Roots crew right here. If you need a little help, you can catch her singing "Phone Down" at the 5:50 mark and the rest of her ditties at 15:00, 20:30, 28:00, 33:50 and 40:20.


TAGS:  erykah badu, janelle monae, the roots, The Tonight Show Starring Jimmy Fallon
Previous: Jussie Smollett & Alicia Keys Come Together To Bring Something ‘Powerful’ To ‘Empire’ Next: St. Beauty Takes Us On A Trip In The Visuals For ‘Going Nowhere’