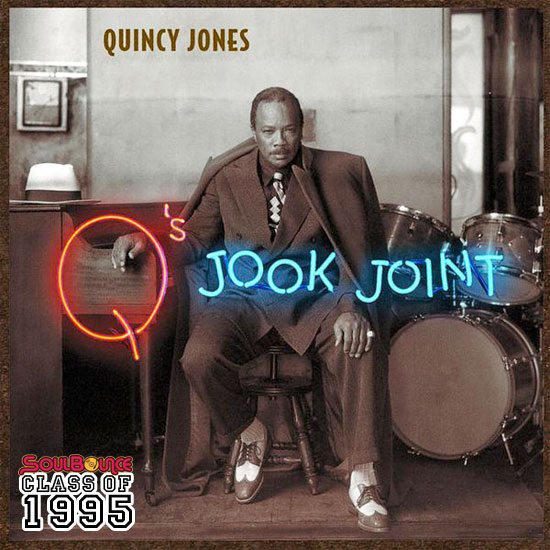 It would seem that getting the likes of Stevie Wonder, Charlie Wilson, Chaka Khan, Brandy, Shaquille O’Neal, Bono, LL Cool J, Barry White, Dizzy Gillespie, Gloria Estefan, Brian McKnight, Take 6, Nancy Wilson, R. Kelly and a host of other famous names onto the same album would be an ambitious undertaking to say the least. However, if there’s anybody who could pull off such a feat, it would be mega producer/composer Quincy Jones, and that’s exactly what he did with the release of his 1995 album, Q’s Jook Joint.

As the title indicates, the album paid homage to the juke joints of years past, bursting at the seams with the boisterous, feel-good vibe that is often associated with them. From the album’s rousing “Jook Joint Intro” to “Let the Good Times Roll” to "Cool Joe, Mean Joe (Killer Joe)," Jones rolled out a swinging, high-powered album that brought the idea of an old school juke joint to life. Although it could have been easy to let Jones' inspiration overtake and bog down the album's spirit, he adeptly weaved in multiple genres, creating a sound that felt both vintage and fresh at the same time.

Whereas Jones’ previous studio album, 1989’s Back on the Block, found him testing the waters by experimenting with a hip hop influence, Q’s Jook Joint found him diving in head first. While jazz, blues and soul are obvious influences, hip hop’s presence is felt throughout, whether it be with Heavy D’s intro to Brandy’s “Rock With You” cover or through the crowded “Stomp,” which featured Melle Mel, Coolio, Yo-Yo, NBA star-turned-rapper Shaquille O’Neal and the Luniz.

Although Jones effortlessly proved that he knows how to jump-start a party, Q’s Jook Joint also revealed that he still knew how to slow things down. These weren’t just any ballads, however. Keeping in line with the juke joint theme, Jones crafted the type of steamy ballads that could easily be right at home being performed inside the smoky confines of that same juke joint that had been rocking just a few moments prior. Brian McKnight, Rachelle Ferrell and Take 6 perform vocal acrobatics alongside jazz saxophonist James Moody on a reworking of “Moody’s Mood for Love.” Meanwhile, the sensual “Heaven’s Girl” showcased R. Kelly, Ronald Isley, Aaron Hall and Charlie Wilson in all their captivating, crooning glory.

In fact, two of the album’s most successful singles were also ballads and both highlighted the vocal prowess of Jones’ newest discovery, Tamia. The fresh-faced singer took the lead on Q’s Jook Joint signature power ballad, “You Put A Move On My Heart.” Released as the album's first single, "You Put A Move On My Heart" immediately caught and held music listeners' attention while showcasing the newcomer's flawless vocals. And what better stamp of approval than to have the legendary Jones not only cosign your skills, but to also replace a more well-known act with Tamia's voice? That's exactly what happened on the album's second single, "Slow Jams." Initially, the song was recorded with Babyface, R&B group Portrait, Barry White and the ladies of SWV. However, it would be the reworked version that replaced SWV with Tamia that would serve as the official single. Quincy's method seemed to work, with "Slow Jams" reaching the top 20 of the Hot R&B Singles chart and earning a nomination for Best R&B Performance by a Duo or Group with Vocals at the 39th Annual GRAMMYs

If Diddy invented the remix, then it was indeed Jones who invented the celebrity guest-spot album, with over 50 identifiable big names credited with appearances on Q's Jook Joint. In fact at times, Q’s Jook Joint ran the risk of feeling a bit like a clown car, where every time you thought that there couldn’t possibly be another guest appearance, the maestro always managed to pull another out of his rabbit hat. He even managed to surprise listeners, teaming with such unlikely collaborators as U2's Bono, Phil Collins and Estefan. In any less able hands, the plethora of guest spots could easily overshadow the main act. However, he was able to expertly corral all of this prime talent, shaping and molding it into one unified sound.

Twenty years down the line, some songs do show the wear and tear of age. Nonetheless, songs like "Slow Jams," "You Put A Move On My Heart" and "Heaven's Girl" are examples of Jones' ability to transcend time, managing to always sound fresh and current and making sure that listeners are having a rollicking good time.