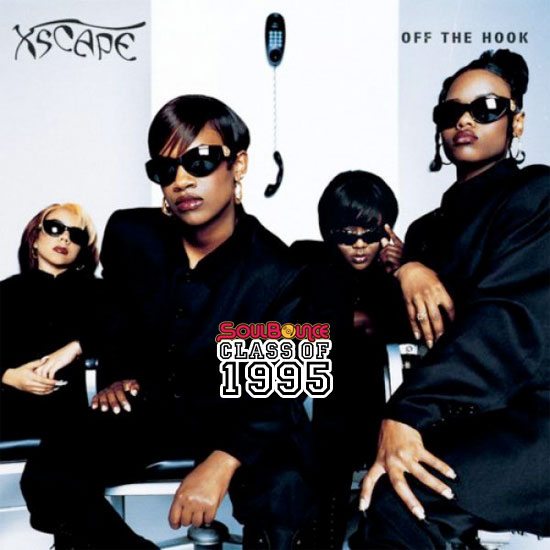 As they say is the case with fine wine, Xscape got better with time. Where the group’s 1993 debut Hummin’ Comin’ at ’Cha showcased the ladies’ raw, hip hop soul chops, their 1995 effort Off the Hook demonstrated the group’s potential thanks to more mature material. Not that the preceding album was juvenile — it’s just that on the second go-round, they sang songs about love, sex and coming-of-age themes backed with more conviction and likely more experience, while proving they could still rock a party.

Both were immediately made clear when “Feels So Good” debuted as the album’s lead single. The lusty ballad-turned-hip-pop club banger featured the crew in full feenin’ mode, each entranced by the pleasure-bringing powers of their respective lovers. Borrowing a play from TLC à la “Creep,” the ladies showed a little skin and aqua-gyrated with the best in some of the clip’s more sensual scenes. But sophistication was also present as they donned sleeker dos and form-fitting styles — a contrast to the baggy gear seen during promotion of their first album. Mentor Jermaine Dupri is stamped all over the track, reiterating, “This is for those who like to pop the trunk / And let it bump, b-bump,” putting his signature So So Def sound onto the melody. Not a bad move considering his part in making CrazySexyCool a multiplatinum hit and introducing the world to Da Brat with Funkdafied.

“Can’t Hang” gets the title as the most aggressive track on this set, both sexually and musically. “You and me / Let’s get down / Even though you claim that you’ve been around / I betcha can’t hang,” the group sings, before guest rapper MC Lyte drops a verse about making “the lightning come before the thunder.” The collaboration would excite listeners so much that the two acts teamed up again for the Sunset Park-featured “Keep On Keepin’ On,” which hit movie screens and airwaves the following year.

The party continued to move thanks to Organized Noize and Erik Nuri’s cosmically infused “Keep It On the Real,” and “What Can I Do,” which was co-penned by Shirley Murdock and borrowed its beat from Slick Rick’s “Lick the Balls” to keep feet shuffling.

But the bulk of Off the Hook is cozily blanketed in the silky softness of the bedroom, a space best filled by a cover of The Jones Girls’ “Who Can I Run To.” Reaching No. 8 on the Billboard Hot 100 and No. 1 on the R&B tally, it would become the biggest hit from Off the Hook, with the quartet staying fairly true to the original composition and blessing us with a two-part storyline that continued into the clip for “Do You Want To.” Poetic pondering and bold declarations filled the Daryl Simmons-penned lyrics, while both songs’ videos followed the romance, heartbreak and breakup of Tiny and her man, “Z-Bo.” So much drama!

More makeout music filled the nooks and crannies of Off the Hook, securing its place as a mid-’90s backseat dream. The longing heard in “Hard to Say Goodbye;” the “I’ve got a surprise for you” invitations whispered on “Do Like Lovers Do;” the first-hand navigation of “Work Me Slow” and the ambiguity of relationships sang angelically on “Love’s a Funny Thing,” spiced up many a night for loving couples.

With competition among girl groups stiff, Xscape managed to fight off the sophomore jitters when they returned with Off the Hook. Though America was still chasing waterfalls with TLC and starting to fall in love with the powerhouses vocalists of Brownstone, Xscape managed to chisel deeper into their niche with a cohesive package of songs in the increasingly saturated market. The album not only helped grow the So So Def empire and set the tone for 1998’s Traces of My Lipstick, but — depending on your metrics — Off the Hook rivals their debut in terms of defining their sound and establishing where they fit within the music world.