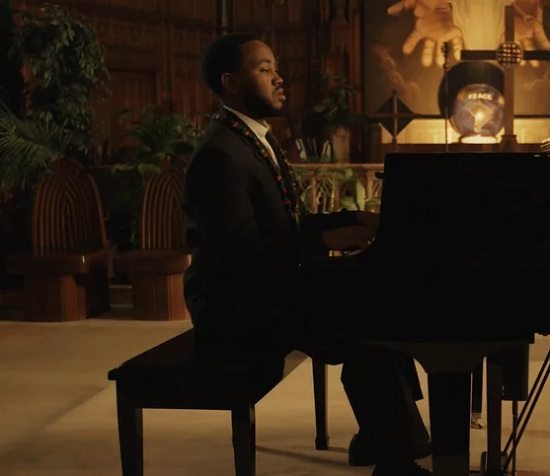 With just three weeks to go before Chi-Raq explodes onto theater screens nationwide, Spike Lee has kept up a steady stream of clips and sound bites since the official trailer was released earlier this month. Love it or hate it, the movie has been a trending topic of conversation, eliciting critiques from Chicago citizens, political activists and everyone in between. The latest movie-related visual piece happens to be our first official taste of the movie soundtrack. And like the trailer, "WGDB" is sure to prompt some heated discussion.

Written and performed by native Chicagoan Kevon Carter, the song is powerful ballad that underscores Chi-Raq's premise, the rising death toll in the city of Chicago, particularly the young victims. It's never fully explained what "WGDB" actually stands for, but based on the subject matter, you can create your own acrostic (i.e. "Why Guns Destroy Blackness"). Ironically, the song wasn't written for the movie. Kevon wrote the song months ago simply because he was disturbed by the violence in his home town. Fate stepped in and now he's helping to shine a light on an issue that is near to his heart.

Directed by Spike Lee, the simple but moving visuals are set in the historic Chicago church The Faith Community of St. Sabina (which also appears in the movie). Subtle details like the word "Jesus" being reflected on the piano top, Kevon donning the "Chi-Raq" green, black and red beaded necklace that Spike has been rocking and the string ensemble members draped in the black and white "peace sign" beaded necklace worn by John Cusack's character Fr. Mike Corridan, further enhance the solidarity that the movie hopes to inspire. The most profound scenes, however, are when the camera focuses on the families of Amari Brown and Vonzell Banks -- the slain victims mentioned in the song. It's heartbreaking to see the pain on their faces, and it humanizes the issue in a way that a movie never could.

Like the movie itself, the song is bound to spark some controversy with lyrics like "We're the only race that shoots and kills themselves" and "What's the use in saying 'Black Lives Matter' if we're gonna kill ourselves." It also sounds a tad dismissive when mentioning the sexual assault claims against "Brother Bill Cosby." Not to mention the Drake/Meek Mill beef reference already sounds dated. Nonetheless, the song has its merits and if nothing else, will definitely get people talking. And on the heels of the funeral of 9 year-old Tyshawn Lee, it's clear that conversation is still needed. Conversation leads to action and the time to act is now, because..."THIS IS AN EMERGENCY." Watch the powerful video below, pre-order the soundtrack here, and check out Chi-Raq when it drops on December 4th.