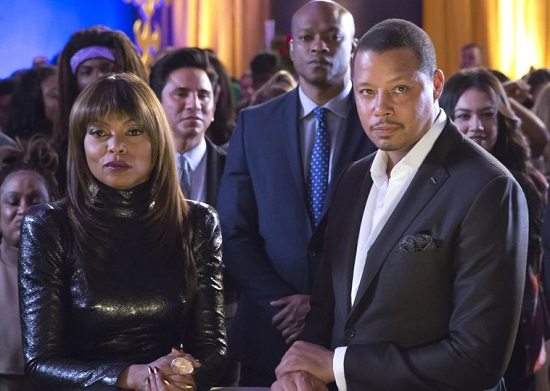 We can all agree that Empire has been on #TeamTooMuch for the majority of this season, and last week was no exception. Cookie and Candy went trolling the streets of Philly to bring back a wayward Carol (and even got Rosie O'Donnell in on the act), Lucious was still busy with that SwiftStream nonsense — even going as far as to try and leverage his past "hits" as collateral, Laz's dark double dealings were brought to light, Anika doubled down on the crazy and Jamal decided to dip his toe (among other things) in more feminine waters. But, of course, with this week's episode being the fall finale, the drama is ramped up to 10. So let's dive in, shall we?

Everyone in the world of Empire is abuzz with the announcements of the nominees for the American Sound Awards happening. Especially Jamal, who tunes in just in time to see Jason Derulo announce the first of his many nominations for the awards show. Oh, but Jamal isn't alone, as it seems that he and Skye Summers (Alicia Keys) went far further than the kiss that we saw them plant on each other at the end of the last episode. They're giddy and feeling a little blissful after their hookup, but unfortunately, Lucious happens to walk in on their giddiness and spoils the groove. He's supposedly there to talk business, but he can't help but to ask  if Jamal's "hitting that." Jamal confirms that he indeed is, but is quick to specify that it changes nothing about his sexual orientation. Lucious, of course, ignores that last part and is just happy that it seems Skye has "fixed" his son. How sweet.

Luckily, we don't dwell on that moment for too long, as Lucious actually does get down to business with Mimi Whiteman. The two are closing the much-ballyhooed SwiftStream deal, but not without Mimi having reservations about Lucious selling off branches of the company to make it happen. Lucious assures her that he knows what's best for Empire and even lets her know that when it comes to his company, he gets the final say so, board members be damned. Mimi listens to this all a little too intently as she suspiciously holds her pen at just the right angle to signal that something might be amiss. But, of course, Lucious pays that no mind and Mimi moves the convo along, discussing her breast cancer treatments and that her wife will be attending the SwiftStream announcement.

Suddenly, we're at Leviticus for Charlemagne Tha God's ASA Announcement Jam as Tiana (who they only bring out to hawk new music it seems) takes the stage to perform her latest Rihanna-like hit "Do Something With It" and announce the nominees for Rap Artist of the Year. (Is it us, or is this not the most drawn out way to announce awards nominations ever?) However, the nominations don't go as expected, at least not for Hakeem, who gets looked over for the likes of Blue On, Powder Yay, Skrillz and rival Freda Gatz. As expected, Hakeem pouts and Lucious' snake ass gloats. Not letting much of a beat pass, Jamal and Skye are taking the stage to perform their less-than-inspiring duet "Powerful," which is apparently a single now. While they perform, Lucious and Jamal's publicist discuss the nominations, which Lucious doesn't put too much stock in (perhaps because he's a 19-time loser). As Jamal keeps racking up the noms, his publicist rubs salt in Lucious' wound by reminding him that Jamal could grab the Song of the Year nom, a category that Lucious has been notoriously shut out of.

Meanwhile, Charlemagne Tha Sh*t-starter does his usual after the performance by questioning Skye's blackness. While the comment comes way out of left field, it does serve as lazy but effective plot device to bring into question whatever the hell it is she and Jamal are doing when Charlemagne throws Jamal's gayness into the mix. Skye is understandably upset and wonders why Jamal didn't come to her defense. But before Jamal can answer, Lucious is quick to ease her doubts by promising that she can play solo at his SwiftStream announcement, which is slowly turning into the event of the century (in Lucious' mind, at least).

At yet another ASA nomination event, Jamal's publicist fills us in that Jamal's been nominated for yet another award nom (his fifth, to be exact). Jamal also uses the moment to promote his new Pepsi commercial (an actual commercial that the show clunkily shoehorns into the program). But before we see that, Lucious is sure to point out to the publicist that Jamal and Skye may be dating, which kind of puts a crimp in marketing Jamal as a gay champion in music. Oh, Lucious.

In Cookie land, the Lyon family matriarch is a bit shook after discovering that Laz was a wolf — or maybe bull — in sheep's clothing. Unfortunately, that also means that her Cookie's Cookout dreams have gone up in smoke. However, she does have a obligation to perform at her former penitentiary digs after the promise she made to Pepper in last week's episode. Though she has her reservations about visiting the place that kept her away from her babies for 17 years, she's a woman of her word and shows up to the correctional facility with artists in tow. After reuniting with a couple ladies, she inquires after one in particular, Jezzy, whom she described to Hakeem as one of the best female rappers she's ever heard. Sadly, Jezzy isn't in the mood to talk to Cookie, as she's caught a life bid after murking her cellmate over some toothpaste (apparently Jezzy doesn't play when it comes to her oral hygiene).

At Chateau D'Andre, the faulty alarm system is going off again as a now noticeably pregnant Rhonda talks with her hubby. Anika is soon at the gate to visit and drop off a gift for the upcoming baby Lyon. She has some girl talk with Rhonda, but mostly all she has is sour grapes since she's pregnant with Hakeem's secret love child and is getting dissed left and right by almost all of the Lyon clan.