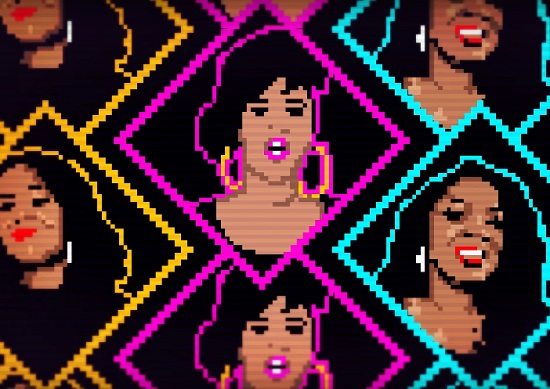 If they had just left it at their debut EP The Story, the ladies of KING would've forever had a place in our hearts. But with the announcement of their upcoming debut album, We Are KING, and the release of their latest single "The Greatest," the heavenly trio has us looking forward to 2016 like never before. To help make the wait a little more bearable, the group — consisting of members Paris and Amber Strother and Anita Bias — has dropped a creative and eye-catching video to accompany "The Greatest," and it's sure to catch the attention of '80s babies everywhere.

The ladies shirk a traditional video, instead opting to be inspired by the 8-bit video games of the '80s and early '90s like Mike Tyson's Punch Out and Super Mario Bros. The result is a colorful, sports-themed clip with an emphasis on going for the gold. While sports like track and field, basketball, hockey and, of course, boxing (the song does reference Muhammad Ali, after all) take up most of the screentime here, the trio themselves do make an appearance as smiling 8-bit avatars outlined in bright colors. It's enough to make us want to break out our NES and play a few games of Tecmo Bowl.

We Are KING will be available for purchase on February 5th, but you can pre-order the album now and score yourself a download of "The Greatest" in the process. But before you rush off to do that (that is, if you haven't already done it), check out imaginative video for "The Greatest" right here.