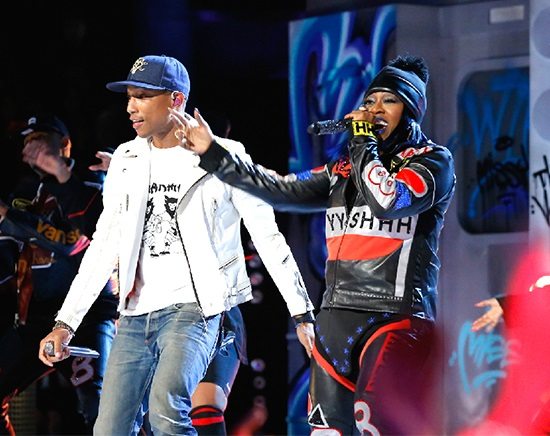 Last night was the finale of The Voice and while we probably won't remember who won (spoiler: it was Jordan Smith — not that many will care), the show did deliver with live performances from big names, including Usher, Justin Bieber, Coldplay and The Weeknd. But without a doubt, the night's big showstopper was Missy Elliott's return to the television stage with her debut live performance of "WTF (Where They From)."

Riffing on the video, the audience found themselves transported to WTF Station, where someone who we assume was Missy danced in the mirrored sweatsuit from the clip as marionettes of her and Pharrell Williams mouthed the song's first chorus. But then Miss Misdemeanor pulled a switcheroo, hopping out of a nearby subway car on the stage to rip into the song and the choreography with the energy that only she can bring. Pharrell also made an entrance of his own, filing out of the other subway car with a crew of male dancers in tow. From there, the Virginia twosome worked the stage like it was a full-time job, delivering one of the best performances that we've seen on The Voice stage in a while.

You can check out Missy and Pharrell doing the damn thing below. And because it is the holidays, we've include clips of The Weeknd's medley of hits and our boy Ursh performing "Without You" with winner Jordan Smith as well.