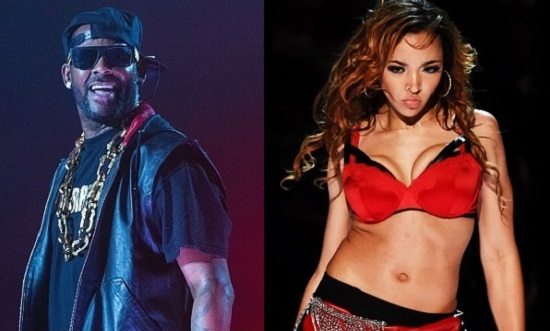 R. Kelly joins forces with Tinashe to usher in another single from his upcoming album The Buffet. Things get pretty real in the latest track, appropriately titled "Let's Be Real Now," on which the two crooners go tête-à-tête blaming each other for a failed relationship. On the track, produced by Cashmere Cat, the duo take turns listing the ridiculous reasons why their relationship didn't work. "Now you want to blame me, say it's my fault for your heartache and pain, sh*t / You created the storm, so don't try to run, baby here come the rain," sings Kells. On the chorus, he sings, "Let's be real now," right before Tinashe lays her own guilt trip down pretty thick. The mid-tempo R&B track has elements of techno and dance, with energetic synth and percussion pulsing through the instrumentals. Both Kells and Tinashe are vocally flawless, but to keep it real, the song is just okay.

The Pied Piper's thirteenth album debuts tomorrow and will include features from the likes of Lil Wayne, Ty Dolla $ign, Jeremih, Jhené Aiko and more. While we probably have an eternal *side-eye* towards Robert, he's staying focused on his music. The singer just released a video on Facebook yesterday urging us to support him and the R&B genre, telling us he's in it for the music and not for the money. While we thought he'd be addressing other, um, issues, he just wants your support. So, if you want to listen to R. Kelly and keep it all the way real, you can pre-order The Buffet on iTunes and listen to his latest track with Tinashe "Let's Be Real Now" right here.