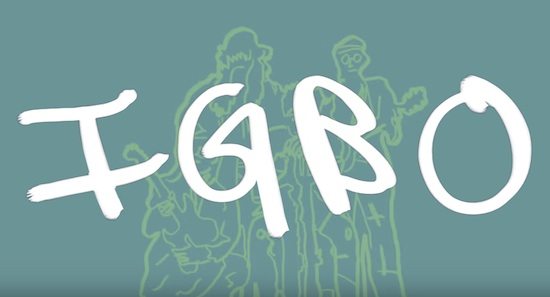 Jazz musician Sylvester Onyejiaka has spent the last few years developing his musical alias Sly5thAve and making a name for himself as a composer and producer (in addition to touring with Liv Warfield and NPG Hornz, that is). His orchestral arrangements have elevated mainstream hits to a higher plane and his stellar collaborations with artists like Jesse Fischer and The ClubCasa Chamber Orchestra continue to garner critical praise and worldwide attention. Likewise, sonic wizard BENAMIN has established himself as a noteworthy producer, collaborating with a slew of talented artists to showcase his amazing beats.

Both based in New York, it was only a matter of time before the two decided to join their creative forces. The end result, IGBO, premiered in 2014 with "Entrance Theme" and "CHANT." Though the two maintain their solo/personal endeavors, IGBO is still going strong. The duo released their debut EP Indigo Green Brown Orange last summer, promoting the effort with captivating live shows throughout the year. To keep the momentum going, they recently dropped visuals for standout track "Gimmie Gimmie."

The song itself is a funky affair reminiscent of synth-laden '80s R&B. Fellow New Yorker 10ille lends her silky vocals to the track, engaging us to sing along with the chorus, "Give me something funky to say (aw haw)." Rhythmic hand claps and a funky bass line are the driving force behind the song, but layers of electro-synth, snappy percussion and vibrant horns create a distinctive jam that can't be ignored. The BENAMIN-directed visuals follow suit with bold, bright colors, animated graphics and close-ups of band mates Jypsy Jeyfree and Denitia Odigie (of denitia and sene. fame) and friends as they groove to the beat (so close that they joked on Facebook, "Gimme something funky to say and a good dentist").

We can't get enough of IGBO's latest, and we think you'll dig it, too. Take in the visuals for "Gimmie Gimmie" below, then keep scrolling to preview the full Indigo Green Brown Orange EP, currently available for purchase via Bandcamp and iTunes.