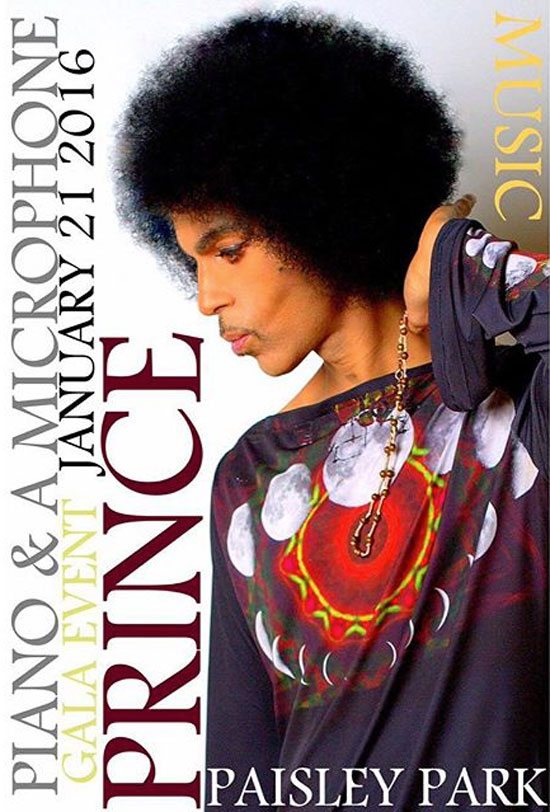 To end 2015, Prince had grand plans for his Prince Spotlight: Piano & A Microphone Tour to hit 10 European countries in November and December. Unfortunately, the tour understandably got scrapped after the terrorist attacks in Paris on November 13th and issues with ticket resellers. Although Prince's European fans will have to wait a little longer to see him live and direct, he does plan on playing his piano and rocking the mic for at least once upcoming show stateside.

His Purpleness took to social media to announce the Piano & A Microphone Gala Event by simply posting the flyer to Instagram and Twitter. The big shindig will go down on Thursday, January 21st at Paisley Park in Chanhassen, Minnesota. And that's all the information that the elusive rock star has graced us with thus far. There's no ticket information yet -- and knowing Prince the prices could range from pocket change to taking out a second mortgage -- and all we have is his beautiful profile on a set of colorful flyers, but there's no doubt that this has the potential to be the jam of the year.

Prince, a piano and a microphone? What more do you need? But knowing His Royal Badness, and with this being described as a "Gala Event," anything could happen and you'll want to be there to witness it. Prince fans should keep their ears to the ground and eyes focused on his Twitter and Instagram accounts for any sign of tickets.


TAGS:  prince
Previous: Sia Dodges The ‘Reaper’ With An Assist From Kanye West Next: Michael Jackson’s ‘Off The Wall’ To Get Re-Release & Spike Lee Documentary