Anderson .Paak & The Free Nationals Take ‘The Late Show’ To ‘Silicon Valley’ With ‘Carry Me’ 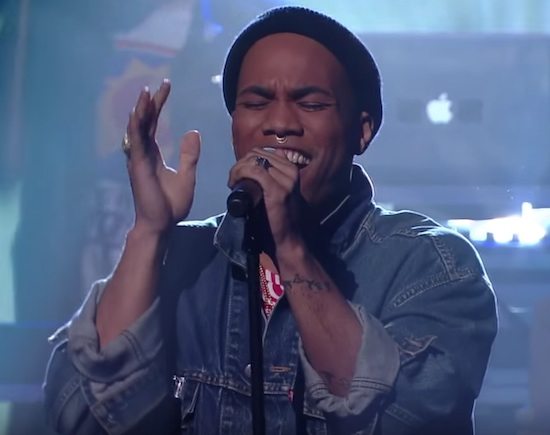 Anderson .Paak is the current talk of the town, and deservedly so. His new album Malibu is an early contender for album of the year and his live show has him gaining a lot of traction as a performer to watch. What will probably solidify that reputation is the Cali singer/songwriter in his recent appearance on The Late Show With Stephen Colbert. Marking his television debut, Anderson and his band The Free Nationals put on a show that will be hard for anyone to forget.

Anderson opened with the too-hot-for-TV "Silicon Valley." The subdued slow jam was a surprising choice, with its mention of "tig ol' bitties" and "tender titty meat." Though bitties made it to air, the second reference didn't. That's because he and the band switched tempos to perform "Carry Me." Anderson, not content with wowing with his raspy vocals, took to the drums as he delivered the song's verse and chorus, proving that he can do so much more than just stand behind a mic and belt a few notes. By performance's end, he'd turned the stage out, rocking out with the band and then snatching host Stephen Colbert up in a victorious embrace.

You can check out the performance right here. If it happens to get you in the mood to see Mr. .Paak up close and personal like, then you'll be happy to know that his name is popping up on quite a few festival lists in the upcoming months (like this one and this one). Looks like Anderson is in line to have his best year ever.