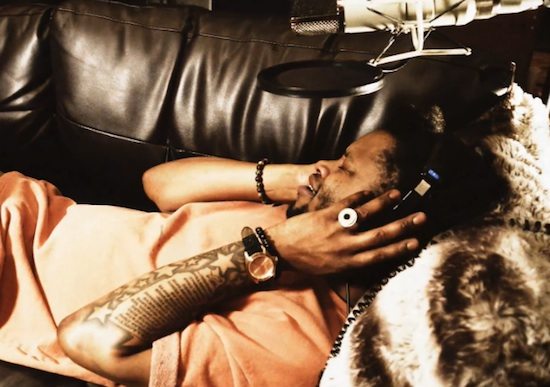 It's no secret that BJ the Chicago Kid is on fire right now. With his velveteen voice and his penchant for incorporating old school R&B vibes into his projects, the Chicago-born singer has quickly become a household name. It hasn't been long since he dropped his new single “Turnin' Me Up,” a track from his forthcoming album In My Mind, and to our surprise (and pleasure) he has already dropped the visuals for the song.

The music video for “Turnin' Me Up” is explicitly about the making of music. These visuals are a welcome change from the barrage of video vixens, fast cars and alcohol that we usually see. While the approach is nothing new (Marvin Gaye's video for “I Want You” anyone?), it gives us a more intimate, inside look into what happens when musicians come together in the studio to create great music. For the fans really interested in what goes on behind the scenes musically, this video is a great way to see one of the jam sessions that happen away from the public eye.

BJ casually lay own on a brown leather couch and sings into a mic suspended above him as the camera captures additional scenes of him and his band. He's got a cast full of talented musicians (one of which is SoulBounce fam PJ Morton) grooving along with him, with the camera stopping to capture each one as they play. There're some cool visual effects as well -- geometric shapes expand and breath along with the music while the video has a grainy, vintage filter on top of it. The song itself is smooth with a neo-soul backbone and is sensual, classy and romantic. The bass adds a funk worthy groove to the track, making it impossible to sit still while listening to it. The harmonies and musical arrangement sound like they belong on any one of D'Angelo's albums, which is no surprise considering BJ cites D as a musical inspiration and recently released three amazing covers of D'Angelo classics.

In My Mind drops February 19th and will include “Turnin' Me Up” along with some of our favorites from BJ like “Resume” and “Church.” With features from artists like Kendrick Lamar and Chance the Rapper, In My Mind is bound to be one of the hottest R&B albums of the year. If you absolutely can't wait until the 19th, you can pre-order the album on iTunes and get instant downloads of BJ's five singles. In the meantime, check out the music video for “Turnin' Me Up” below and get more personally acquainted with the Kid.