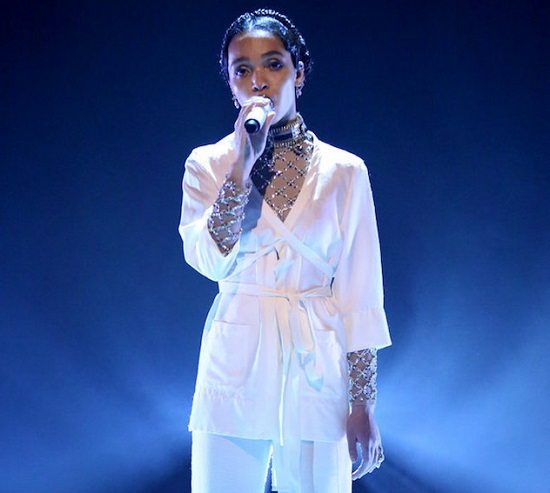 Yesterday saw many of Britain's brightest musical talents taking the stage and winning awards. But if you were looking for the avant-garde artistry of one FKA twigs, you were out of luck. That's because the eccentric singer/songwriter was across the pond in New York working it out for the audience of The Tonight Show Starring Jimmy Fallon.

was there to promote her latest single, "Good To Love," which is somewhat of a departure from the style of song we're used to from the British songbird, and she delivered a performance that matched the song and video's feel. Draped in a white outfit and dripping in sparkling jewels, she started the set alone on the stage before her guitar player (who was rocking matching attire) stood beside her. He then went to join the rest of the band as twigs stood relatively (and unusually) still inside a white circle on the stage. However, near song's end, she untied her white jacket, revealing a sheer, long-sleeved top, as she gave a quick interpretive dance to the strains of the song. The whole performance proved to be quite mesmerizing and showed why she's one of the most thrilling performers of the new school to watch.

Get into FKA twigs' subdued and alluring performance below.