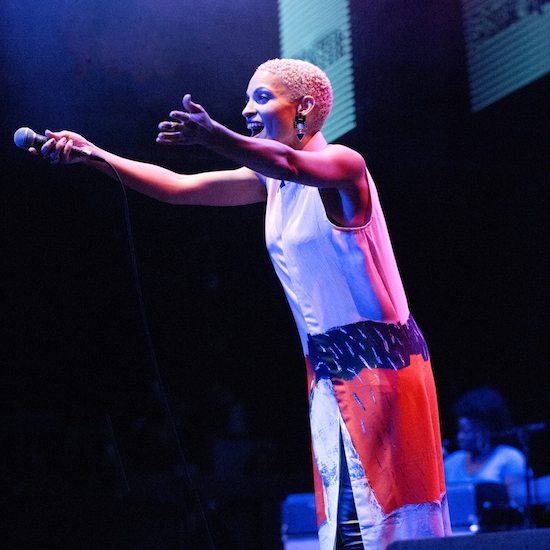 Earlier this month, the 8th Annual MojaMoja Brunch & Benefit Concert happened on a sunny Valentine's eve in Los Angeles. The Avalon Hollywood was the scene for the annual gathering of music lovers who came out to brunch with a purpose and enjoy live music from this year's all-female lineup of Goapele, Lizzo, Gavin Turek, Mara Hruby, Raquel Rodriquez and DJ Rashida. In addition to the talent roster being all women, regular host and event co-creator Garth Trinidad handed the mic over to yours truly to serve as the hostess for the afternoon that benefited the Girls Scouts of Greater Los Angeles Science, Technology, Engineering, Art, & Math (STEAM) program.

As patrons filtered into the Avalon Hollywood, they noshed on passed hor d'oeuvres and sipped complimentary cocktails while DJ Rashida spun tracks to match the sexy vibe of the venue. After Rashida set the mood, it was showtime. Raquel Rodriguez kicked the live performances off with original selections and an impressive cover of Chaka Khan's "Ain't Nobody. " She turned everyone into a fan by the time she left the stage.

The lithe and lovely Mara Hruby followed and breezed onto the stage to sing tracks from her acclaimed EPs. She sounded as angelic live as she does on record, and we'll be hearing more from her with the release of her debut album this year. Next up was Gavin Turek whose set was high-energy personified. Turek kicked the tempo up several notches and set the stage for rapper/singer Lizzo who turned things up even more. Lizzo was joined by her DJ and two dancers, aka The Big GRRRLS, and they collectively set the place on fire. If you didn't know Lizzo's name before, you knew who she was after her memorable performance.

Headliner Goapele wrapped up the event. As the only artist to play at the annual MojaMoja Brunch & Benefit Concert twice, it was quite evident why she was asked back. Goapele had the audience mesmerized. Attendees were on their feet and singing along to her classic track "Closer" to end the show on an inspirational note.