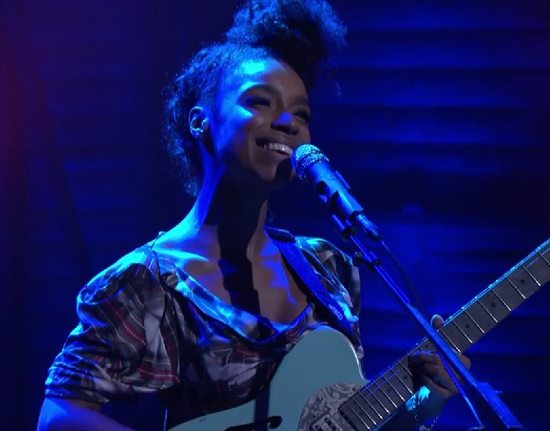 Lianne La Havas' return to the spotlight last year with her sophomore album Blood was much welcomed around these parts. It was apparently welcomed all over as well, with the singer selling out shows left and right Stateside each time she's visited the U.S. in the past year. While that's awesome for Lianne, it's not so great for folks who have been wanting to see the singer do her thing live but missed out. Luckily, the lovely Lianne has popped up on television to share her talent with the country, including her recent stop on Conan last night.

Armed with only an electric guitar and an amp and backlit by blue light, Lianne delivered a stunning rendition of her song "Unstoppable." The song was always beautifully, but the stripped back take is positively mesmerizing, allowing us to focus on the transfixing melody and Lianne's elegant vocal phrasing on the track. But Lianne's one woman and a guitar performance didn't just stop there. As a web exclusive, Lianne also did an stripped version of Blood track "Grow." The call to action sounds even more urgent as a quiet plea thanks to Lianne's vocal, which remains powerful and defiant despite the subdued sound.

You can catch both Conan performances below. As well, be sure to check out this year's GRAMMY Awards ceremony this coming Monday, as Blood is up for a GRAMMY for Best Urban Contemporary album.


TAGS:  Conan, Lianne La Havas"
Previous: Morning Soul: When You Feel Down & Out, Sing A Song Next: Mark Ronson Gives Us A Twofer With Visuals For ‘Summer Breaking’ & ‘Daffodils’