Miguel Rides His ‘waves’ To ‘The Late Late Show’ 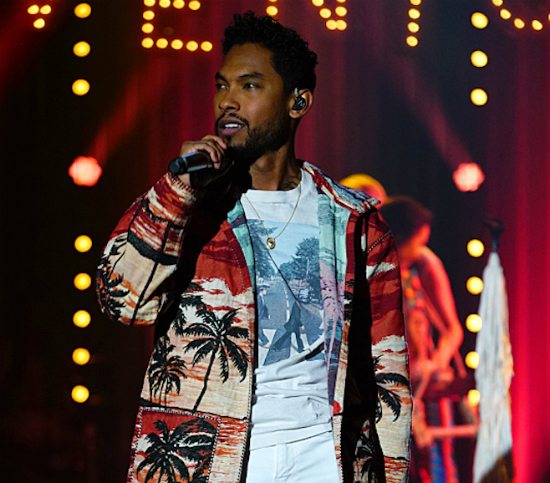 Miguel is still getting his party on and taking his single "waves" to the TV circuit. Last night the singer performed the track we still have on repeat on The Late Late Show With James Corden. With a bright set and extras ready to make us feel like we were on Venice Beach, Miguel set it off, singing the track with as much rocker angst as he could while the extras backed him up by dancing, skating and improvising to match the hipster party vibe. Switching from moving like Mick Jagger to Michael Jackson, Miguel entertained the audience with all his might and kept them mesmerized right until the end with his mini-mosh pit and screaming fans.

Miguel's been making his rounds over the past few days, he recently surprised his middle school with a talent show performance and performed the remix of "waves" with Travi$ Scott on The Ellen DeGeneres Show this week. And after all that, Miguel still has plans for his Wildheart track "waves." Tomorrow, he'll release Rogue Waves, a collection of new remixes of the single, featuring Travi$, Kacey Musgraves and RAC. Check out a full tracklist below of Rogue Waves and while you're at it, watch the interview with James Corden as he talks his engagement, surprise school performance and the new project. Hop on Miguel's "waves" and hold on tight when you watch his latest performance on The Late Late Show right here.