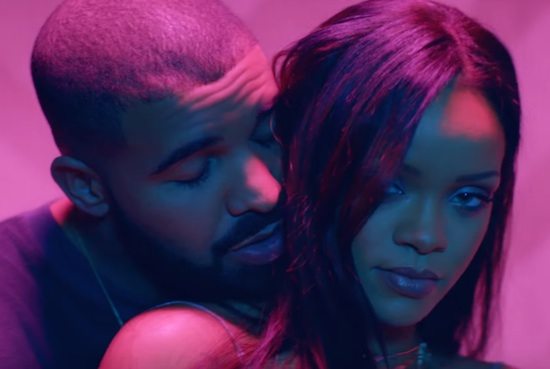 Days after her 28th birthday, Rihanna has decided to give everyone a gift with the release of the music videos for her Drake collaboration "Work." Yes, you read that right -- videos. RiRi has released not one but two sets of visuals for the lead single from ANTI in one supersized clip.

Rihanna's two-for-one deal starts with the Bajan singer strolling into a spot named The Real Jerk in a hooded pink fur that looks like it's from the Cam'ron Collection, if such a thing existed. Drake exits the vehicle and accompanies her into the place, but it's all about Ri at the onset as she sheds her mink and goes to work on the dance floor in the dancehall. She wines all by herself in front of a mirror while couples around her grind up on each other. The bashment is all the way lit with Red Stripes and Coronas flowing, spliffs rolling, bodies sweating and jerk chicken cooking. Once it's his turn on the mic, Drake joins Rihanna on the dance floor and lets her do all the work grinding her backside into him. Drake unfortunately doesn't bust any moves or get loose like the other men in the video, but he looks sexy enough just standing there in his OVO sweatsuit and beard, so we're good. Directed by Director X, the video is reminiscent of his previous work with Sean Paul and brings "Get Busy" to mind.

Just when you think you're viewing experience is over (in case you didn't notice the video was over seven minutes long and less than four minutes passed), the next video loads. For the second offering, director Tim Erem switches locations and gets Drake and Rihanna alone in a living room for a little Netflix and chill situation minus the Netflix. The setting is different as well as the color palette, which is awash in hues of pink, purple and blue. The lighting adds a sexy touch to the clip, but Rihanna and Drake make it even hotter with their chemistry since the two of them are the only focus here. Erem's visuals aren't as action packed as X's, but they both bring something different to the table. Get your "Work" twofer from Rihanna and Drake right here and decide which one you like more for yourself.


TAGS:  Cam'ron, Director X, drake, rihanna, sean paul, Tim Erem
Previous: The Weeknd Brings Lauryn Hill Along For ‘In The Night’ On ‘The Tonight Show’ Next: Willow Smith Gets Mellow With ‘JIMI’