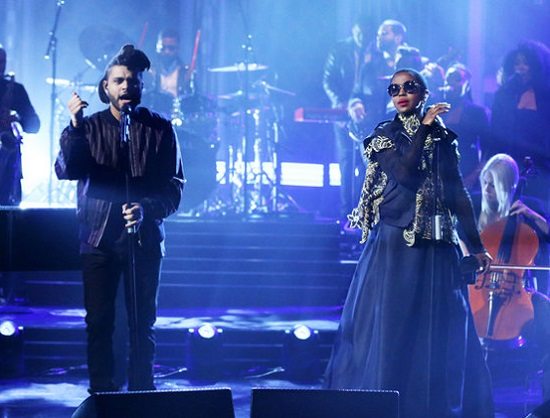 Remember a week ago when a little thing called The GRAMMY Awards took place? Well, while the performances that did happen went off without a hitch (for the most part — sorry Adele), there were two last minute cancellations that lit up social media. Rihanna had to pull out because of a bout of "bronchitis" while a surprise appearance by Ms. Lauryn Hill during The Weeknd's was axed due to Lauryn being Lauryn. But those that wanted a Weeknd/Lauryn duet weren't left out in the cold, as the two singers eventually shared the stage on The Tonight Show for a duet of Weeknd's "In The Night."

Bathed in blue light, Weeknd took the stage with a full band as he launched into the tale of a wayward stripper falling down a dark path. After he finished his verse and a chorus, Lauryn strolled onto the stage wearing all black and a large pair of shades as she delivered the second verse. While the song's subject matter doesn't exactly scream "Lauryn Hill duet," she managed to make it work for her, following The Weeknd's cadence and even putting some of her own spin on it. As the performance goes on and the backing singers join in, however, things get a bit wonky. There's a weak singing link among the group and, while I won't say who in particular, I will say their name is derived from what we call the days between Friday and Monday. All in all, it was an interesting performance that gave us a glimpse of what could've happened on the GRAMMYs stage.

If you're curious as to what Lauryn and The Weeknd sound like together, check out their performance below.