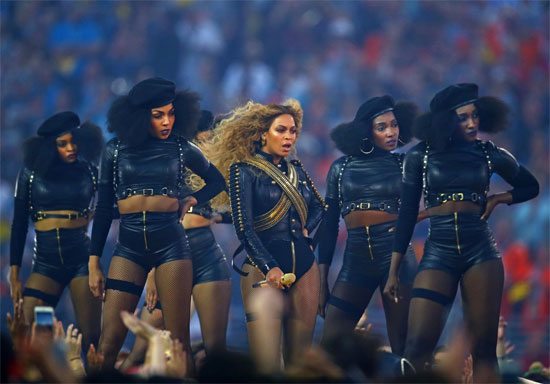 February 6th: Beyoncé gets the world and the Super Bowl in "Formation"

On Saturday, February 6th, on the eve of her Super Bowl 50 performance, Beyoncé Giselle Knowles-Carter, made the world stop once more to bask in her flawlessness. With the release of “Formation” Beyonce addressed her haters while praising her black Southern roots. Featuring lyrics such as “I like my baby hair with baby hair and afros / I like my negro nose with Jackson 5 nostrils,” “Formation” was more than just another song with nursery rhyme-esque lyrics, but a tribute to everything black and beautiful with no conditions or respectability politics.

The visuals for the song were just as stunning, featuring Beyoncé on top of a cop car in the middle of a flooded New Orleans, black men and women from various economic backgrounds, a young boy in a black hoodie dancing in front of a police lineup against a wall that proclaimed “Stop Shooting Us” and, of course, a multitude of beautiful, intelligent and proud black women getting it like nobody’s business. She asked everyone to “get in formation,” get some information and “Slay trick or you’ll get eliminated.” An unabashed, unafraid, unapologetic ode to blackness, even the haters were getting in “formation” for their Beyhive membership cards.

Just 24 hours later, King Bey followed up the new #BlackGirlMagic power anthem with a live performance at Super Bowl 50. You know, that performance that was supposed to be Coldplay featuring Bruno Mars and Beyoncé, but turned into Beyoncé and some weird alternative opening act. Celebrating the 50th anniversary of the Black Panther Party, Mrs. Knowles-Carter strutted out on the field dressed in a Michael Jackson-inspired costume and flanked by a multitude of black women with armed afros, berets and swag for days. Performing with military precision, the women electrified the crowd and even got into an “X” formation in honor of yet another Civil Rights era revolutionary, Malcolm X.

“Formation” and the accompanying hoopla was not without its controversies. There were thousands of think pieces and thoughtless responses. Some warranted, some not so much, from discussions on the use of post-Hurricane Katrina New Orleans as the backdrop to a music video, to an anti-Beyoncé rally to an anti-anti-Beyoncé rally. Of course, none of this could hamper the strong message delivered by one of pop music’s biggest stars that her color and culture is just as elegant, fascinating and marvelous as anyone else’s in the world. -- Ken Hamm