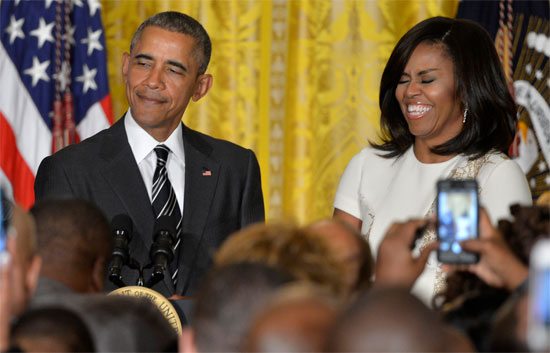 February 18th: POTUS & FLOTUS celebrate Black History Month at the White House and we celebrate them

For President Barack Obama and First Lady Michelle Obama, February 18th marked their final year as hosts of the Black History Month reception at the White House. Like every event held by the Obamas, the gathering embodied the same style, grace and distinctive flair that permeated the halls of 1600 Penn throughout their residency. Leave it up to Traci Braxton to take a celebration and turn it into a partay by just being herself during the President's opening remarks. Among a sea of cell phones, all lenses were focused on the First Couple, but for a brief moment, Traci owned the room and made history of her own with a hearty "Heeeeyyyy, Michellllllle!!" And here's just another example of why we love our President. Instead of brushing her off or ignoring the outburst, he ran with it and declared "We know it is Black History Month when you hear..." After a good laugh, the Obamas endeared us once again with a simple but cute exchange "You look good, too, baby!" Black love, Black humor and overall Black excellence. Just another day at the White House.

Later that same day, a sweet centenarian named Virginia McLaurin stole our hearts as she realized her dream of meeting "the Black president." Her joy could barely be contained as she was formally announced and introduced to President Obama and his "black wife" Michelle. Sister McLaurin showed up with her nails done, hair done (everything did) and looking quite a bit younger than her 106 years. We can only imagine the stories she can tell, especially having survived some of the most turbulent times in our country's history. After showing that she still had plenty of spunk, she shared her joie de vivre through a jaunty dance with the Obamas. We salute this Black elder whose life journey brought her from the sharecropping fields of South Carolina to the White House in Washington, DC. "Heeeyyyy, Virgina!! You look good, girl!" -- B. Cakes