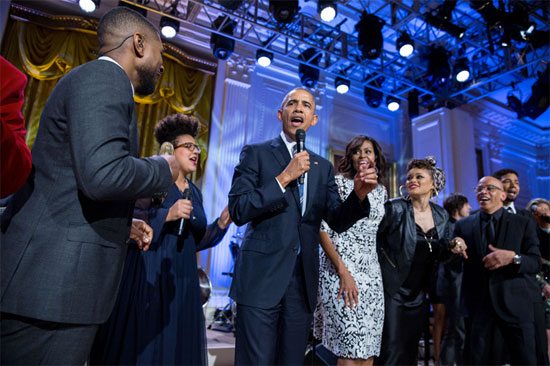 February 24th: In Performance at the White House series ends with a soulful bang in tribute to Ray Charles

It's only right that the blackest president (read: only) would host one of the most melanin-filled tributes of all time at 1600 Pennsylvania Avenue. President Barack Obama and First Lady Michelle Obama welcomed artists such as Usher, Anthony Hamilton, Yolanda Adams, Leon Bridges, Andra Day, Brittany Howard, Jussie Smollett and more to tribute the national treasure that is Ray Charles. Rickey Minor served as executive music director for Smithsonian Salutes Ray Charles: In Performance at the White House, the sixteenth In Performance at the White House program during President Obama’s administration.

To ensure the event was as black as possible, Barack got in on the action and even hopped on the mic to sing the response portion of Charles' “What'd I Say” along with Usher. The crooner — Usher, not the President — performed "Georgia On My Mind," Anthony Hamilton sang "Night and Day" and Reverend Al Sharpton was spotted in the crowd dancing. If that's not black, we're not sure what is. Also making it one of the blackest evenings was the realization that it would be the last time we saw Barack and Michelle paying tribute to African-American musical achievements. While we have a moment and wade in our feelings, you can watch the hour-long extravaganza right here. -- Mercy