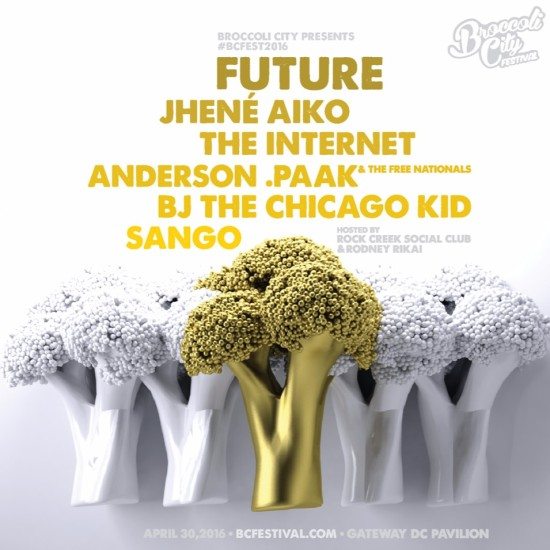 We're always down for a good music festival. Because...music. But when the underlying purpose of such a gathering is for a good cause, well, that just makes it even better. The 2016 Broccoli City Festival in Washington, DC is such an event, using music as a draw to inspire and affect environmental change in urban communities.

In the past, the talent roster has included SB faves like Erykah Badu and Thundercat. Now in its fourth year, the annual gathering promises to continue its track record of musical excellence with a lineup of artists who have broken industry molds and carved out a distinct niche across a wide cross-section of fans. On April 30th, Atlanta rapper Future and Cali singer/songwriter Jhené Aiko will head to the Nation's Capital to headline the 10-hour marathon of performances. Hosted by Rock Creek Social Club and Rodney Rikai, the stages at Gateway DC Pavilion will also offer performances by The Internet, Anderson .Paak & The Free Nationals, BJ the Chicago Kid and Sango.

Of course, people will come out to enjoy the phenomenal lineup, but Broccoli City co-founder Brandon McEachern proudly revealed that since its inception, the festival has "empowered over 20 thousand millennials to become change agents in their community." Plus, the Broccoli City group has formed partnerships over the years that allow them to "utilize innovative solutions that create higher standards of environmental sustainability, education and access to quality food and shelter." These music lovers have taken "Don't talk about it. Be about it!" to heart, and our neighborhoods are the better for it. To that end, they are offering the Power of One campaign, an opportunity to earn a free ticket by: (1) volunteering for a community service event and (2) making a $10 tax-deductible donation (to help offset the cost of supplies for the community project). Amazing music AND an opportunity to help a neighborhood in need? Sounds like a no-brainer.

The 2016 Broccoli City Festival takes place on April 30th from 12 noon to 10 p.m., rain or shine. VIP Passes are sold out, but general tickets are still available (for now). Visit the website for more info on ticket sales, the Power of One campaign and Broccoli City's overall mission. Afterwards, turn up the volume on the BC Fest Mix curated by producer and Soulection crew member Lakim.