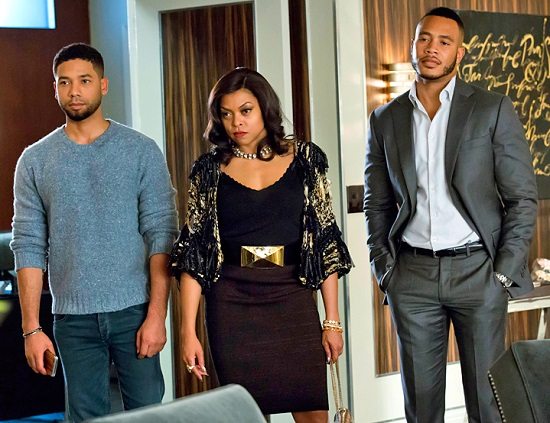 The old adage goes that March comes in like a lion and out like a lamb. However, if FOX and the #1 show on TV, Empire, has anything to say about it, March will be going out like a Lyon this year, too. Of course, that all depends on the quality of the spring premiere episode. Last fall, after an engaging first season, things seemed to fall apart. The fight between Lucious and Cookie Lyon, despite a few good reads, lost most of its steam. Instead of corny-yet-memorable tunes like “Drip Drop,” we were treated to the stale “Snitch Bitch” and other less than memorable songs. And don’t get us started on Cookie opening the season wearing a gorilla suit.

However, there is some hope. The mid-season finale gave the promise of a better future. Rhonda, Andre’s wife, was pushed down the stairs of her home and left for dead, Boo Boo Kitty is pregnant with Hakeem’s baby, and in an interesting plot twist, Camilla, played by Naomi Campbell in season one, returned to make a hostile takeover of Empire Records, stripping Lucious of the company he built from the ground up.

Just like Lucious, the show is up against the same proverbial wall, as fans, while loyal so far, are slowly beginning to log off. Did the mid-season premiere come out guns blazing and roaring like a lion, or did hit us as soft as lamb’s wool?

Episode 211: Death Will Have His Way

The show opens with Rhonda bloody and helpless on the floor of her mansion, watching a pair of red bottoms walk over her body and right out the front door. Fighting for her life, Rhonda reaches for an iPhone that’s cracked and in worse shape than she is. Then she gets the bright idea to use the last bit of her strength to throw the phone and break a window to set off an alarm to bring help. Exasperated, she prays that the baby is safe.

While Rhonda is fighting for her life, Hakeem is unknowingly about to have a fight of his own. Hakeem cuts on the lights in his apartment to find Cookie sitting in the dark, waiting patiently with the infamous broom from season one draped across her lap. The scene is absolutely chilling and hilarious, as Cookie sits quietly like a gangster ready to settle a debt or a black mother who waited up for you to come in after curfew. The wrong word or the wrong move could mean death. And because this is Hakeem, we already know this means a beat down. Cookie tries to get Hakeem to change his vote, but the boy is either too smart or too dumb to listen to reason. Cookie goes ham on Hakeem with the broom, her purse, a landline phone and anything else she could find, as Hakeem and the audience are treated to a black momma beat down.

Meanwhile, Lucious is back at Empire, refusing to give up the reigns of HIS company to Camilla. While Lucious, Andre and Lucius's right hand flunky Thirsty are scheming, Camilla and the cops bust in to force Lucious out of HER office. The only thing that gets Lucious to get up is the news Rhonda is in the hospital and his grandchild is in danger. At the hospital, the Lyon family are going through it. However, their heartbreak isn’t enough for them to forget that Jamal went against the family, resigning him to the sidelines. Lucious breaks the news to Andre that Rhonda lost the baby. Hakeem can only watch in horror as his family is tore up from the floor up with grief and despair. Andre is ready to jump in the casket with the baby. Later, Andre and Rhonda have a discussion about God and her loss of faith after losing the baby.

After leaving the hospital, Cookie goes to stately Lyon Manor to console Lucious who is obviously devastated over the death of his grandson. However, evil doesn’t take a holiday. Lucious is back up and at ‘em the next morning ready to take back his company, and threatening to put a bullet in Hakeem if he gets in his way. Cookie, however, tries to calm Lucious down and says she has a plan to get the company back from the inside.