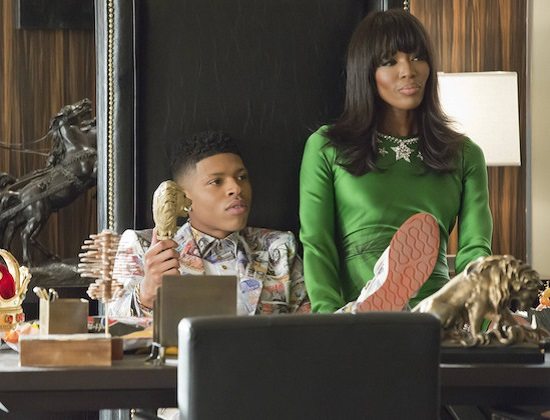 Back at Empire, Camilla is in her new office, looking over some interesting fashion designs, and laying her charm on Hakeem. While the board has their eyes on other candidates, she promises to make Hakeem CEO if he sends his little Mexican girlfriend back to the street corner where he found her. Ouch! Before Hakeem can get his feelings together, Cookie walks in and tries to make a deal. She makes the proposition of Empire buying The Lyon Dynasty since Hakeem is still technically signed to her label. Of course, Camilla wasn’t going to fall for that trick. Cookie takes a couple candies from the candy dish and throws them around the room as she walks out defeated.

Lucious has his own plan in the works. He and Thirsty have assembled a team of ne’er-do-wells to intimidate all of the candidates for CEO of Empire Records. Later on in the episode, we are treated to a montage of their thugs at work, blowing up cars, beating people senseless and hanging a defenseless cat from the ceiling as Lucious dramatically plays piano.

Back at the hospital, Anika Boo Boo Kitty visits Rhonda. Boo Boo consoles her, telling her that everything happens for a reason. Mind you, that reason is she’s jealous of Rhonda and didn’t want any competition for giving birth to an heir to the Lyon throne. Or for short, a b***h crazy. Lucky for Boo Boo Kitty, Rhonda doesn't remember a thing.

Across town at The Lyon Dynasty offices, Hakeem walks in huffing and puffing about to blow the house down because Camilla has ordered him to break things off with Jenny from the block. Instead of being a grown man and saying its over, Hakeem pushes her away by picking a fight about her upcoming NPR Tiny Desk performance. The rest of the mamacitas ain’t got time for the games or the lames and bounce. Laura soon follows, leaving Hakeem a bit crestfallen.

Meanwhile, Jamal meets up with Jameson Henthrop, the gay lobbyist who Jamal enlisted to help take his career to the next level. However, Jameson isn’t happy with Jamal’s recent tryst with singer Skye (Alicia Keys) from last fall. Having sex with Skye works against the gay agenda, and he’s none too pleased. He walks off, condescendingly wishing Jamal a good performance. Jamal later discusses this conundrum with his mother. Cookie advises her son to find a way to play the game. Jamal finds the answer in the performance of his new song, “Freedom,” a wink-wink-nudge-nudge ode to living life on your terms, which wins Jameson over. Because every problem can be solved with a song and a sexy dance number. You should try it sometime.

Back at the Empire offices, Hakeem is putting on his own performance. It seems that Lucious’ intimidation tactics have worked and every Empire CEO with a lick of sense has dropped out of the running. Except, of course, Hakeem. The young, fly and flashy heir to the throne jumps on the boardroom table and makes the case for him to become CEO. The scene ends with Hakeem standing triumphant with a painting behind him that has red paint conspicuously placed so it looks like the youngest Lyon sibling is the victim of a crime scene.

After Rhonda is released from the hospital, Andre takes her home. Instead of convalescing, she decided to climb up the stairs with her broken leg and cane.  Needless to say, she doesn't make it too far and has a brief flashback to the night she tumbled down the stairs and had a great fall. Meanwhile, Cookie, Jamal and Andre pay Jamal and Camilla a visit at the Empire offices. When they arrive, Hakeem is dressed like the Riddler with Camilla as his sexy wench by his side. In a twist on Cookie's original plan, the Lyon's threaten to release Jamal's album on The Lyon Dynasty label instead of Empire. Though Camilla tries to counter with threats of lawsuits, Andre and Jamal have her outsmarted. Hakeem, as the new CEO of Empire agrees to the deal in hopes of being a family again.

While Andre celebrates this victory, his heart still aches from the loss of his child. In a very touching scene, he tries to clean up his unborn child’s room, packing up all the stuffed animals and broken dreams, before breaking down crying in the child's bassinet, asking God for help.

Over at NPR, Laura has the most staged Tiny Desk concert ever. Ain't an NPR employee or desk in sight. (They tried it!) While Laura sings the new song, "Crown," Jamal looks on at the concert on his tablet before going to Laura's home to make things right. Laura decides to give Hakeem her virginity and the couple end up having sex, eventually professing their love for each other.

Of course, not everything is sweet for Hakeem. In another call back to the first episode of the series, Hakeem meets with his father under the bridge where Lucious killed Bumpy and admits to his son that he killed his him there and will do the same to him if becomes CEO of Empire. He hands his son a gun and challenges him to kill him. Hakeem struggles with the decision before telling his father, “I don’t have to do what you want.” Lucious then ominously warns his youngest seed, “I keep my promises.”