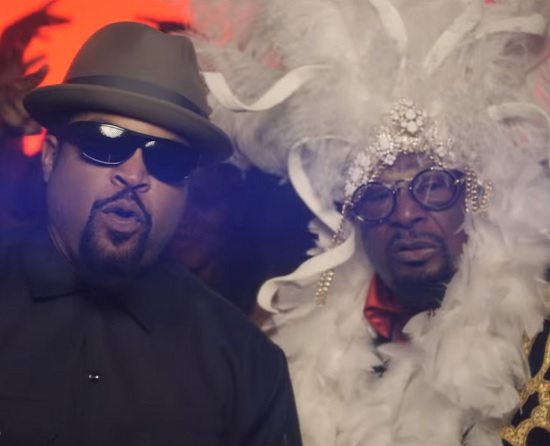 Back in 2014, George Clinton and his band Funkadelic released their album First Ya Gotta Shake Da Gate, a funky project full of the crew's classic sound. That same project found new life this year with a remix of the track "Ain't That Funkin' Kinda Hard On You," featuring Kendrick Lamar. Now the funk pioneer continues to funk harder and harder by adding West Coast representer Ice Cube to the video for the remix.

Directed by Video God, the clip opens with veteran actor and comedian Michael Colyar riding in an old truck as radio reports from the distant past play across the airwaves. As his old jalopy starts to conk out, we see that Kendrick Lamar in a spaceship above Earth is the cause of all his troubles. Soon Colyar is teleported onto the ship and decked out in the flyest zoot suit in the galaxy.

Kendrick delivers a smooth, pimped-out opening verse before George Clinton joins in on the magic decked out in a polka-dot print that would make Kwame jealous. From there the old school party starts with all the hallmarks of a Funkadelic jam session. Cube also delivers a great verse when his time comes around.

While its great to see Kendrick Lamar and Ice Cube working with Dr. Funkenstein and company, the old school band turns this mutha out pretty well all by themselves. However, seeing multiple generations get up on the downstroke together proves just how timeless funk music truly is.